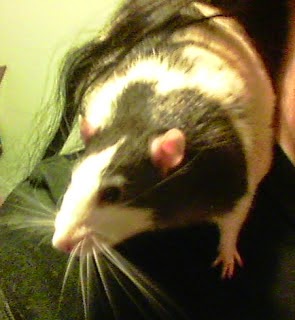 If you've ever owned a guinea pig, you've no doubt heard the term popcorning and probably seen your guinea pig hopping, flipping and jumping all over their cage. But did you know that rats popcorn too?

What is Popcorning?
Just like a kernel of popcorn getting ready to pop, a rat or guinea pig will bounce, jump, twirl and flip and may even sprint in a full out run afterwards. When they do this they are undoubtedly happy and you can almost see the smiles on their little furry faces. When you see a rat popcorning they are letting the other rats in the cage know they are happy or in a mood to play.

In all the years I've had rats, I've had several rats that would popcorn. Brodie, who was my smallest rat would jump and run all over the cage. He would even jump on the backs on his brothers who were twice as big as he was and then run away really fast, stopping to look back to see if they were chasing him. More often than not, they would chase him down, flip him over and groom his stomach until he squeaked.

Ares would popcorn out of the blue, he would start jumping, twirling and bouncing and running from one spot in the cage to another. He reminded me of popcorn popping because he's bouncing all over the place, Boing Boing Boing from here to there and back again. It's very obvious to me he was happy because after he settled down again he will start Boggling and Bruxing which means his eyes start bulging out and he chatters and grinds his teeth. Rats do this when they are happy. Now Lucky and Flower popcorn like crazy too.

How Can I Get My Rat To Popcorn?
Not all rats will popcorn but I have found that while you have them out for play time you can sometimes get them to popcorn by finger wrestling with them. What you do is pick them up and turn them on their back and tickle their belly for just a few seconds. If they come back to play by grabbing your fingers where it looks like they are trying to wrestle with your hand, you know they like this type of play. When rats get excited and feel playful they will sometimes popcorn as they run around playing with you.

I was able to get Ares and Brodie to popcorn by lightly scratching or tickling their backs or hind ends as they walked by me. This would always get them running and bouncing around. Another way I was able to get my boys to start jumping around was to pet them backwards. Starting from their backs and running my hand from their back to their nose would almost always get them jumping around, but they would come back for more and jump around more when I did it again.

You will see that younger rats are more likely to exhibit this behavior than older rats, because as rats age, they calm down and just want to cuddle on the couch with you.
Posted by Mary Kirkland at 12:00 AM 9 comments