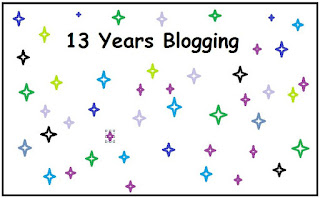 It's hard to believe that 13 years ago I began blogging. It was quite sporadic at first and I had no idea what to write about. I still pretty much write about whatever I want most days and I'm glad that so many of you seem to enjoy my blog posts.

When I first started we had been given a computer because Ken's sister was getting a new one. This was our very first computer and we had no idea what we were doing. She had left a few things on it and told Ken he could just delete whatever he didn't want. Well, he had no idea what he was doing and ended up deleting the Windows OS and we had to call Ken's brother and he sent us a disc to install that gave us a new Windows OS.

We also didn't know you're supposed to have anti virus protection or that you should clear your history and cache every once in a while. We went well over a year without either of those things and wondered how in the world we had so many viruses and things that were slowing the computer down to a crawl until one of our teenage daughter's friends came over and explained it to us. It was pretty comical but live and learn and now we know. Because of all the computer problems back then I would use the library computers but you could only use them for 1 hour per day. So I wasn't posting all that often for a while. And I only had 3 followers when I started out so when I started getting more followers and people commenting, I really enjoyed that.

I've changed a lot in the past 13 years. My daughter is grown and she has a son. Ken and I are celebrating 27 years together this September and now instead of hamsters and rats we have a dog.

So for all of you followers that have been here a long time and for those of you that are fairly new I just want to say thank you for visiting, commenting and enjoying what I've been posting over the years. I hope we'll all be around and blogging for many years to come.