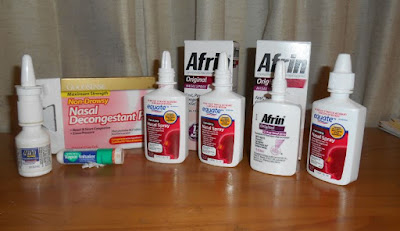 Have you ever tried a nasal spray like Afrin or a generic nasal spray when you've been sick and just wanted to be able to breathe? Yeah? Me too. About 3 years ago, I had a horrible cold and got a free bottle of Afrin to test out. This stuff was amazing! It cleared my stuffy nose up right away!

I hate not being able to breathe out of my nose and I've had some allergies ever since I moved to Las Vegas. I found out that I was allergic to Olive tree's and Mulberry bushes. So since the Afrin was working when everything else I tried was not, I decided to just use the nasal spray until pollen season was over. The only problem was...it never seemed to end for me.

I started out using .05 ounces or Afrin a month. After a few months I was using 1 ounce a month until I was using it every day and buying 3 ounces a month to use. My stuffy nose just kept getting worse so I would use more nose spray. Twice a day went to 4 times a day until I realized that I had been using it every day for 3 years and I was now spraying this crap up my nose 12 times a day and my nose was always stuffy.

I was addicted to nose spray and the consequences of that is called the rebound effect. After a while it stops working and your nose just stays stuffed up all the time. So last month I stopped using it. It was pure hell. I knew it wasn't allergies because there were no other symptoms. No itchy watery eyes, no sneezing, no scratchy throat.

There's only one way to stop the rebound effect caused by nasal spray addiction...stop using it. But stopping it when you're addicted to it causes withdrawal symptoms as well. Headaches, sleeplessness, anxiety and moodiness.

So I started using antihistamine pills and Sudafed pills while I was trying to kick this habit. It was a lot harder than I thought it was going to be. My nose stayed stuffed for more than a week before I finally started feeling some relief. And I mean completely stuffed. No air was moving in or out of my nose at all for about a week. But gradually things started to clear up and get better. It's now been a month and I'm still having some issues with a stuffy nose and I want my Afrin back so bad. But I didn't buy anymore and have tried using those anti snoring devices that hold open your nose at night just in order to be able to breathe a little better. They really don't work well. At one point I thought about getting some plastic aquarium tubing and sticking that in my nose at night so I could breathe. I didn't but I thought about it.

There should be big red writing on the back of these sprays warning you not to use more than 3 days without stopping use for a few days. In the long run they do more harm than good if you use them too often.

I wonder if there's a 12 step program for Afrin Addicts.

Hi, My name is Mary and I'm addicted to Afrin.

Or what happens to someone if they go to jail and are addicted to Afrin?

"I'll trade you a pack of cigarettes for a couple of sniffs on the Afrin bottle, man."