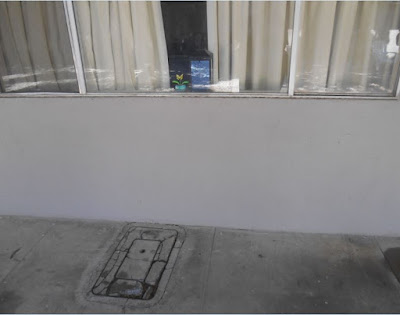 There's an old water valve cover that doesn't work anymore and the cover is all broken pieces of concrete. We've told the old manager a few times that it's an accident waiting to happen because that's my living room window right there and I've watched people trip over those broken pieces and almost fall right into my window. 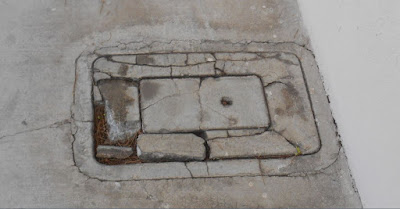 Here's a close up of it so you can see just how broken and dangerous this is. 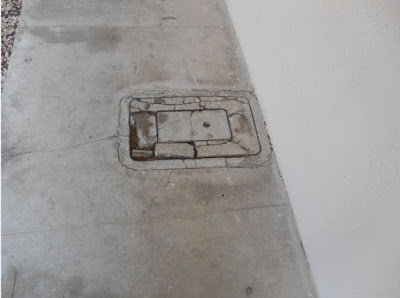 You have room to walk around it but you if aren't paying attention and trip over it, you could really get hurt. I would hate for someone to fall into my window and get cut up. The new manager says she's going to fill it in with concrete but we've already been waiting years for that to happen so we'll see. The water company won't come out and fix it (I already asked) because it's not a working valve anymore. They took the valve and pipes out and moved it out front years ago. 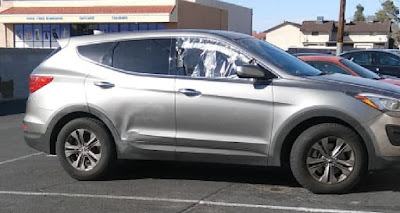 She has plastic and tape in her passenger window right now.

Here's a little update about last week's Apartment Life. The crazy woman who smashed in my neighbors window also smashed the neighbors car windshield and another neighbors side window. My daughter got pictures of both cars for me to post. I have no idea if the woman has been arrested or not for all the damage she did that day. 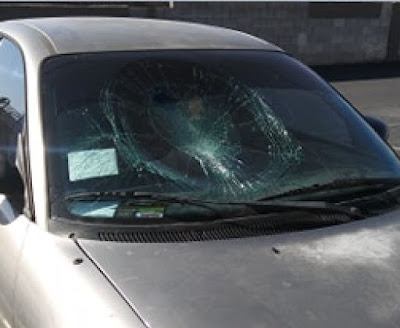 This week another of my neighbors had his living room window smashed in. This one had nothing to do with the other one that happened last week, totally separate incident. 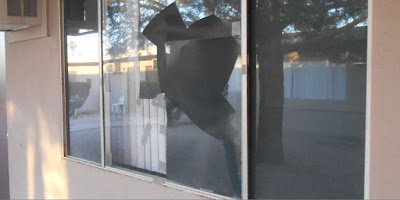 My neighbor was walking by and told me he was looking for the new manager because she said his window was going to get replaced on the Monday after it was smashed but she had already left before it was fixed and he was pissed so I asked him what happened to his window. He told me that one of his brothers who is homeless and hangs around sometimes had come pounding on his door a few nights ago and demanded $20 and got mad when he wouldn't give it to him. So later that night the homeless brother came back and smashed his window in. He saw him running away when he looked out the door. The next day my neighbor went down to the courthouse and got a restraining order so the brother can't come within 500 feet of him now. So hopefully that takes care of the problem for now.

I've seen the brother who's homeless behind the trash cans smoking meth a few times so I'm assuming that's why my neighbor doesn't have him living with him.