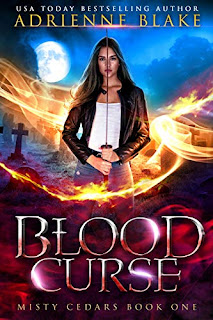 The last night of Holly George's life is a total blur. A routine traffic violation. A sudden, blinding pain. A gargantuan wolf lunging for her. Now, within three days, she will transform into a creature of the night, held under the thrall of a vampire named Micah, who has been terrorizing the valley for years.

With Noah--the smokin' hot wolf-shifter--by her side, the pair set out on a mission to prevent Holly from joining the ranks of the undead. Can Holly and Noah end the vampire's reign of terror, or will the attraction sizzling between them be their undoing?

Holly has three days to find the vampire who bit her and kill him or she becomes a vampire and slave to Micah. Micah is a vampire who has been rampaging all over the city and causing a lot of problems.

Noah is a wolf shifter and decides to help her find the vampire who has been hunting in his territory. He wants to get rid of Micah but he also wants to help Holly.

Noah and Holly go about trying to track down the vampire and meet some interesting people along the way. They get close to Micah but then Micah knows they're coming and decides to come after them to finish what he started with Holly. He never meant to leave her alive and thought she would have died on the ground where he left her but she didn't and he thinks it's funny that she's actually coming after him.

This had a slow burn romance between Holly and Noah mostly because Noah doesn't know if Holly is going to come out of this alive and shifters mate for life and he doesn't want to be mated to a vampire. So he's hoping they can kill her sire before she fully transforms into a vampire.

This was a great adventure, watching these two strangers go up against a powerful vampire to try and save Holly's life was a lot of fun to read.