I have a couple of things for you this week. 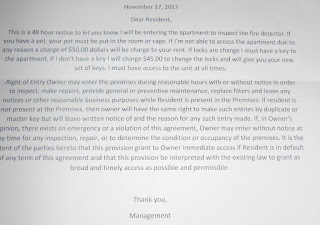 I waited a while to post this because I have to wonder just how legal what they did was. They handed out these notices on a Friday and didn't come to check out the fire alarms until the next Tuesday. So it was much more than the 48 hours they said they would be. I wonder if they can just come anytime after the 48 hours or if it legally had to be that day the 48 hours was up on. Anyway, I just thought all of the added nonsense after the "I'll be checking your smoke alarm in 48 hours" was really not needed and a bit over dramatic really.  So I'm posting it now. If you can't read what it says, I'll write it out below.

This is a 48 hour notice to let you know I will be entering the apartment to inspect the fire detector. If you have a pet, your pet must be put in the room or cage. If I'm not able to access the apartment due to any reason a charge of $50.00 will be charge to your rent. If locks are change I must have a key to the apartment. If I don't have a key I will charge $45.00 to change the locks and will give you your new set of keys. I must have access to the unit at all times.

Right of entry owner may enter the premises during reasonable hours with or without notice in order ti inspect, make repairs, provide general or preventative maintenance, replace filters and leave any notices o other reasonable business purposes while resident is present in the premises. If resident is not present at the premises, then owner will have the same right to make such entries by duplicate or master key but will leave written notice of and the reason of any such entry made. If, in the owners opinion, there exists an emergency or a violation of this agreement, owner may enter without notice at any time for any inspection, repair, or to determine the condition or occupancy of the premises. It is the intent of the parties hereto that this provision grant to owner immediate access if resident is in default of any term of this agreement and that this provision be interpreted with the existing law to grant as broad and timely access as possible and permissible.

The second thing I wanted to show you is this. 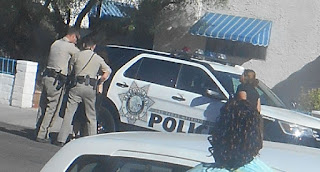 The police were on my street again. People were fighting and the police showed up and arrested one woman.

Her three friends were not happy about it and were all yelling at the police as they arrested her.

The police kept yelling at them to get back and be quiet. All the while the woman who was being arrested was fighting and struggling with the police as they handcuffed her.

Well that's it for this weeks Apartment Hell  Life! Be sure to come back next week for more.