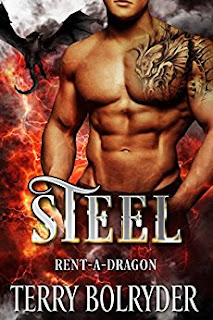 A dragon as a handyman? Ridiculous.

At least Liam Steel thinks so. Sure, he and his crew of newly-awakened metal dragons are experts at building things, but after being sunk at the bottom of a frozen ocean, all they want is to find the mates they were sailing in search of in the first place, and Liam isn't sure how that can happen while he's playing in the dirt. Until he meets his first client, a sweet, curvy, no-nonsense business-woman busy taking care of everyone but herself. His heart screams 'mate', and he's ready to get his hands on more than her yard.

Kate Hinton doesn't know what to make of the beefcake Rent-A-Dragon sent over to help with her yard. Impossibly tall with soulful teal eyes, dark hair, and the features of a male model, she's pretty sure he should be walking a runway rather than digging trenches in her yard. And the way he looks at her? Like nothing else matters in the world. But the more she gets to know her kind, friendly, amazingly efficient handyman, the more she is realizing he's not from her world.

He lives in a remodeled castle. He doesn't know certain modern words. And he definitely doesn't understand the rules of modern courtship. But somehow, Kate is finding herself falling in love with this 'dragon' all the same, and finding out there is a whole other world outside her own. One full of secrets, and danger, and maybe even the love of a lifetime.

Kate and Liam were so good together. I loved how they got along right from the beginning even if she had no idea that he was a dragon shifter. From the title I really thought that these dragon shifters were going to be made of steel or robot-like but that's just not the case. I realized only after reading this book and looking for the next one that this is a spin off of The Awaken Dragon series. I will have to go and read that series as well because even though this book and most likely this series can be read without reading the other series first, I'm sure that the characters will make more sense once reading about them in that first series.

Liam meets Kate while working as a handyman as his cover for finding his mate. He and the other dragons are awesome at fixing things so this works out well. Kate gets to know Liam while he's fixing her house and yard. But she is hilarious because she can't stop staring at him while he's working up a sweat and taking his shirt off. All the naughty things she was thinking about him and about doing to him were just funny. If a tall, muscled, hot guy were working in my yard, I'd probably be having some of the same thoughts.

There are different types of dragons and some of them don't get along. While the main story is resolved there's a bit of a back story going on that didn't really get resolved and I suspect we'll be seeing more of the mad dragons in subsequent books and I look forward to seeing what happens with that story line.