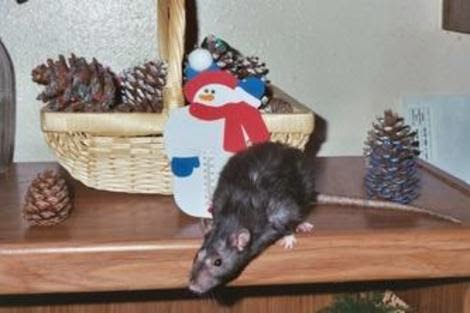 Rats are social animals and like to be around humans and other rats. Children under the age of 10 should be supervised when handling and caring for their pet rats, as rats are somewhat fragile creatures and can be hurt easily. Many rats will sit and groom their human companions, giving you kisses (licks) and gentle nibbles. This is a way to show you that they like you and have accepted you as a part of their family.

Rats do make noises, they will chatter their teeth when you are holding and petting them. This is called bruxing. They will do this when they are happy or content. It's much like when a cat purrs, you know they are happy.

Rats will also make squeaking noises if they have a cage mate and are play wrestling. Most times they will play wrestle at night after all the humans are in bed and the room they are in is quiet. If one of the rats gets a little rougher than the other one likes they will make a high pitched squeaking noise to let the other rat know they are being too rough.

Rats will also squeak if they are scared. The best way to make sure you don't scare your pet rat is to talk to them as you open cage. That way they know you are there and are less likely to get scared and bite you. Most rats are friendly and won't bite, but there is an exception to that rule. Just make sure not to scare them or let small children squeeze them tightly when they hold them so the chances of getting bitten by a rat are very small.

Although Rats will make chirping, squeaking and teeth gnashing noises, if the sounds you are hearing are made when they are breathing or you think their breathing is labored or sounds crackly, you need to take them to a Veterinarian right away. This could be the first signs of an upper respiratory problem and without Veterinary care they can die from this rather fast.

Rats will also sneeze. If you are using the wrong bedding, for instance one that has a lot of dust in it or one that your rat is allergic to, your rat might start sneezing. If you hear your rat sneezing, or when they sneeze there is a yellow mucous getting sprayed from his nostrils, he probably has an upper respiratory problem and will need antibiotics from a Veterinarian before he will get better. Pine or cedar bedding is sold for Rats and Hamsters, but is not good for their health. This type of bedding is notorious for causing breathing problems in small animals. Most people who keep rats will tell you to get Care Fresh Bedding but I use fleece blankets.