She said it's been a long time since she used the "N" word. I really think people are making a bit too much a deal over this. I have to say I'm a little surprised by this. This all came about because...

She never said that she uses that word now or anytime recently. The fact that she answered the questions truthfully should say something about her character. She could have lied about it.

"Court records show Deen sat down for a deposition May 17 in a discrimination lawsuit filed last year by a former employee who managed Uncle Bubba's Seafood and Oyster House, a Savannah restaurant owned by Deen and her brother, Bubba Hiers. The ex-employee, Lisa Jackson, says she was sexually harassed and worked in a hostile environment rife with innuendo and racial slurs.

During the deposition, Deen was peppered with questions about her racial attitudes. At one point she's asked if she thinks jokes using the N-word are "mean." Deen says jokes often target minority groups and "I can't, myself, determine what offends another person."

And from another article...

The language in question was revealed recently as part of a deposition of Deen by Jackson's lawyers in May.

Jackson lawyer: "Have you ever used the 'N word' yourself?"

Deen testified that she probably used the racial slur when talking to her husband about "when a black man burst into the bank that I was working at and put a gun to my head."

"I didn't feel real favorable towards him," she said, referring to the robber.

Jackson lawyer: "Have you used it since then?"

Deen said she couldn't remember other contexts in which she used the slur, but "maybe in repeating something that was said to me."

"But that's just not a word that we use as time has gone on," she said. "Things have changed since the '60s in the South. And my children and my brother object to that word being used in any cruel or mean behavior."
Posted by Mary Kirkland at 6:03 PM 2 comments 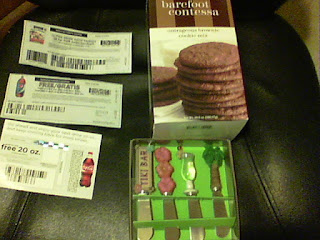 This week I got some awesome freebies. Here's what I got.
A coupon for a free Tai Pei single serve Asian Garden product- I found out about this free from Freebie Shark.

A coupon for a free 20 Oz bottle of Coke - I got this from turning in some of My Coke Rewards.

And I won The Barefoot Contessa Cookie Mix and Tiki Knives from Lisa Renee Jones blog Thank you to my friend Elf at The Reading Addict for letting me know about this contest.

You can click on all of those links and find out how you can too win stuff on a blog, enter coke rewards codes or sign up for great freebies.