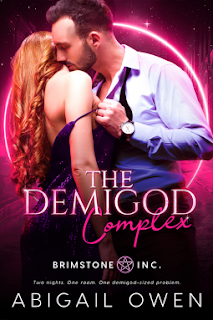 When Lyleia Naiad was head-hunted by Brimstone, Inc., for her job as Executive Assistant to a high-powered billionaire demigod, she was given one directive—do NOT fall in love with Castor Dioskouri. Doesn’t matter if he’s the son of Zeus and can electrify a room with a single glance. As an ex-nymph, she possesses a unique ability—a gift from the goddesses to protect nymphs from the randy gods—to resist her boss's charms.

Or so she thought.

He insists she accompany him to an alpha wolf shifter mating ceremony, an event where the pheromones fly, and so do clothes...and inhibitions.

Goddesses save her, because Castor has stolen into Lyleia’s heart, and she’s not so sure she can hold out much longer...

Lyleia is Castor's executive assistant and she's also a nymph but she lost her spring (powers) because she was betrayed. She still has the power to resist the pull of any supernaturals but she still feels attracted to Castor who is a demigod.

Castor needs Lyleia to accompany him to a mating ceremony and be a buffer for him since these things end up making all involved, even the guests feel very much like having sex and he's hoping that having her there with him will keep the females away.

Castor is a demigod, son of Zeus. He's been sorta lusting after Leia which is weird since he hasn't felt much in the love department in a while, but his heart is telling him that there's something real between them, he just has to make her believe it too.

Going to the mating ceremony proved to be a bad decision as someone from her past was there and he wanted her dead. She thought she had a stalker, someone who had been breaking into her apartment and now she knew for sure who it was. When Castor finds out who is after her and why, his protective instincts take over and he helps her. He's a demigod so he pretty powerful and if she's to fight this person and win, she'll need his help in the end.

Because of the danger, the pheromones at the mating ceremony and the lust they already felt for each other that they've held back for so long, when they finally give into what they feel it was quite powerful. Their romance is sweet and hot. I laughed so many times during this book because of something that one of them would say and I love when a book can make me laugh. This was a fun book to read and a great way to start off a new series. I look forward to reading more now.

Disclosure: I was given an ARC of this book for free in exchange for a review via NetGalley but all thoughts and opinions are my own.