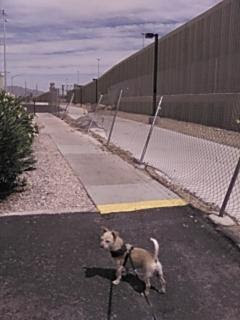 This chain link fence separates my apartment building from the public sidewalk to the right. Cars are not supposed to drive on that sidewalk but they do in order to get from our street to the parking lot of the grocery store next door. Well one of the cars driving by ran over the fence and now it's down. It's City property so I doubt it will get fixed anytime soon. 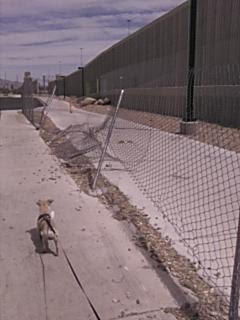 It's a pretty large section of the fence that's now laying down on the sidewalk. 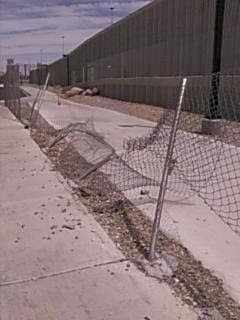 I haven't seen anymore cars trying to drive on this sidewalk though. There was barely enough room before and now with the fence fallen over into the sidewalk, there's no room for a car to drive here unless they drive over the fence. I wouldn't take the chance of that. And for those that are new here, that wall is the sound wall. Directly on the other side of that wall is the freeway and the wall is supposed to keep the noise down from it. The wall is 30-40 feet tall, I'm not sure exactly how tall it is but it's big.
---
The police showed up last Thursday night but I didn't post it last week since my post was already so picture heavy. The police were at drug dealer's apartment and had everyone there out in handcuffs.
The police were yelling for Jessica to come out. Yes, the same Jessica that I've had on my Sunday post before. But she must have slipped out the bedroom window because they didn't get her.
My daughter took these videos. She and a few other residents were sitting outside watching the whole thing unfold. 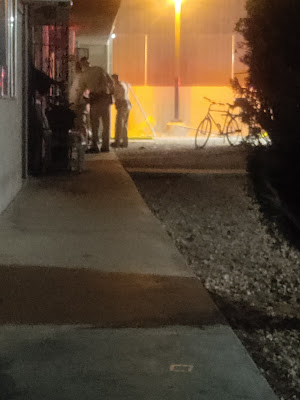 My daughter said the police were down there for a long time. 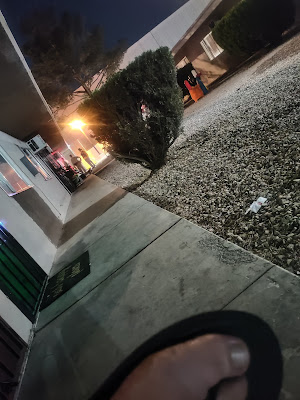 A bunch of cops showed up for this one and had a bunch of people in handcuffs. 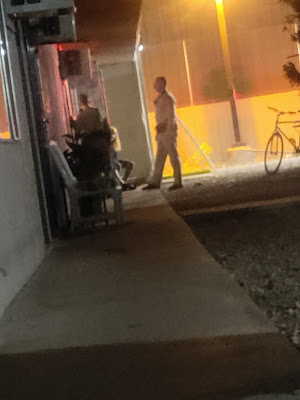 People around here refer to that apartment as drug dealer's apartment because it's more than a little obvious that they are dealing drugs out of there. People come all hours of the day and night, stay for a few seconds and leave. And it's mostly tweakers and homeless people that hang out down there. But on this day, no one was arrested. They must not have found any drugs that night which really surprises me. Maybe Jessica took them with her when she escaped out the back bedroom window. Who knows.
---
In other news the roofer's have finished and they put the gutters back on.
The high this week was 102F/38C
The low this week was 66F/18C
So that's it for this week's Apartment Hell  Life! Be sure to come back next week for more.
Posted by Mary Kirkland at 12:00 AM 48 comments