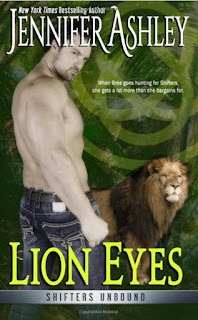 Bree has just decided to give up trying to be a Shifter groupie when a lion Shifter slams into her truck and tells her to drive. Seamus is on the run from hunters, other Shifters, and who knows who else. All Bree knows is that he's compelling, needs her help, and most intriguing of all, wears no Collar ...

Seamus McGuire fears he's gone crazy--feral--and become a killer. His only hope of getting away from the hunters and police on his tail is Bree, a human woman who not only knows a lot about Shifters but has great compassion for them.

Things are more complicated than they seem, though. Seamus is on a mission--to protect those in his care after the destruction of Kendrick's compound of un-Collared Shifters. Seamus must keep it together and make sure his charges stay hidden, but at the same time, he's pulled to Bree as he's never been pulled to a woman before. He needs to prove he's innocent and not crazy before it's too late for himself, Bree, and those he's vowed to protect.

Seamus isn't sure if he's turning feral and has just killed a couple of humans or if someone set him up. All he knows is that he can't remember everything that happened, 2 humans are dead, he got shot and hunters are after him now. So he does the only thing he can think to do, he jumps into a car and yells for the woman to go.

Bree likes shifters and she knows a lot about them because she's a shifter groupie. So when a crazy shifter jumps into her car and yells for her to go, she goes. At first she's scared, then curious and then when it looks like the hunters are about to get them, she does something I wasn't expecting. She isn't the stupid little shifter groupie that I first thought she was, she is strong, smart and stands up for what the wants and believes in. She's awesome!

Although Seamus is afraid of what he might do and he's on the run, we find out that he's one of the good guys because he's been looking after others who are also on the run. Bree and Seamus realize that Bree is his mate and that's why she is able to calm him down just by being near him.

And one of my all time favorite shifters, Tiger is back in this book as well. That man is really something and I look forward to seeing more of him in each book. I've been reading this series for a long time and I think this is a great addition to the series.

Bree and Seamus go through a few things and Seamus isn't sure who he can trust at first but finally figures out that the shifters that tracked him down aren't the bad guys and he can trust them. In this series, the shfters are treated badly by the government and some law enforcement and they are forced to live in shifter towns and have to wear magical collars that hurt them if they fight, the collars are not something they want to wear. I can only hope that somewhere in the future we see the shifters get more freedom and the laws pertaining to them start changing for the better.

If you'd like to buy this for yourself, you can find it here.