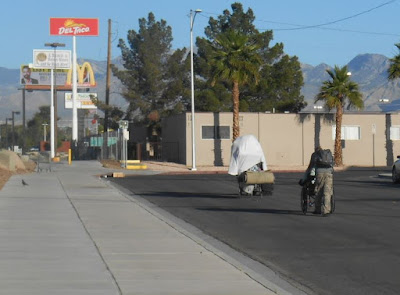 This week I've been seeing these people walking by me every morning and wondered where they were going. So I walked up that way and saw them out in the parking lot between Del Taco and McDonald's, setting up a big white overhead tarp to sit under and panhandle. Ken said he's seen them in the Cal Ranch parking lot too, they keep moving every few days. 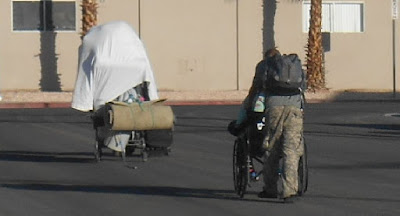 There's not a lot going on around my neighborhood right now and things have been pretty quiet but of course I still see some strange things like this guy in front pulling a red kids wagon with the tarp and poles and behind him was a guy pushing a lady in a wheel chair. Ken said he sees them over in the parking lot with signs asking for money and food and people are always giving them stuff so they seem to have found a good place to set up during the day.

We have a large homeless population here in my neighborhood and I always see them setting up tents or sleeping near the sound wall. As long as they aren't bothering me or causing problems I don't care that they're here. I do have a problem when I see them shooting up on the stairs to my apartment complex or find them passed out on drugs on the walking path where I walk the dog but that's only happened a few times.

The other thing that happened this week was the new manager finally made an appearance in the office. Ken told her about the homeless lady and meth addicts staying in a vacant apartment across from me and on Wednesday night she and the maintenance guy made entry into that apartment and found her in there and made her leave the apartment. Then they boarded up the broken window and told her that someone would be checking the apartment all weekend to make sure no one else goes in there so don't try to break into the apartment over the weekend. I was really glad that the drug addicts got kicked out finally. It only took the manager a little less than a week to get to it after Ken told her about it. Frankly I think it should have been done right away and they should have called the police and had her trespassed from the property because she's already back and staying with the drug dealers in my courtyard.

Here's a picture of the broken window boarded up. 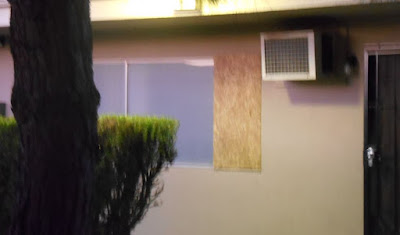