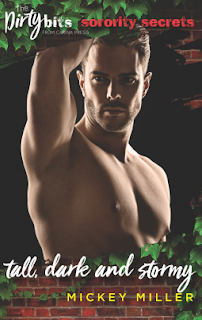 Sorority Secrets: The virgins of Beta Kappa Nu would do anything for each other. Even auction off their most valuable asset…

They say I’m a rich, bitter a**hole who isn’t capable of normal feelings.

Well, they say a lot of things.

And they don’t know shit.

You don’t become a billionaire without a strain of obsession bubbling within you. Strong and true, like a deep blue pilot light.

It’s true, I don’t suffer fools. And I don’t have time to become emotionally involved.

I loved once before. This is my curse. It keeps me focused.

Until I see Stacy’s ad. The office intern, auctioning off her virginity for charity, right there on the screen.

And they’re about me. Her boss.

I’ll be damned if one of these tasteless men with no appreciation for this smart, beautiful angel will be her first.

If anyone has her, it’s going to be me.

For those times when size does matter. The Dirty Bits from Carina Press: quick and dirty, just the way we like it.

As soon as I started reading this I disliked Jack right away. He had just fired a couple of people and it made him feel like a badass. Sure the guy he fired had it coming after sending a female co-worker dick pics but that's beside the point. This guy was getting off on the power he held and I didn't like him.

Jack was curious about Stacey so he checked what she had been looking at on the work computers and saw she was auctioning off her virginity. He was shocked at first, then more curious and then intrigued. He decides to call Stacey into his office and let her know that he read what she wrote about him, her fantasies about him and the auction.

I really liked Stacey and after a while I liked Jack as well. They both have painful pasts and while Jack's past made him a bitter jerk, it made Stacey a better person. Jack remembers how he used to be before he was emotionally hurt and he realizes that Stacey is pulling that part out of him again. They get along really well and this story turns hot and sexy really fast.

This is a fast novella. It might be a quick read but it was hot, dark and steamy.

I voluntarily read and reviewed an advanced copy of this book. All thoughts and opinions are my own.