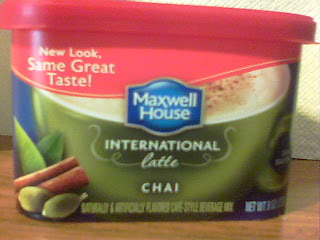 Last year I found out that this product was no longer being made, I also found out that a lot of people were very upset about that. All I had to do was read the comments on Amazon.com to see that. So the makers of my favorite Chai Latte went back to the drawing board and made a new formula for this product. We the drinkers of it...didn't like it and told them about it.

A few months later I found out that they reformulated the recipe and now have this new product on the market and as I read the reviews I found that people said that this new reformulation is as good as the original. So I took a chance and ordered a couple of canisters from Amazon and was pleasantly surprised when I tried it.

I ordered it from Amazon because I can't find it in the stores anywhere around where I live. I was reading the comments on amazon.com and the people were saying they couldn't find it where they lived either. I don't know why it isn't on more store shelves but I did find it on Amazon.com.

Just like it says on the canister, it has the same great taste. I was so happy about that, I missed that. I am glad the makers of this product listened to the people who wanted to buy it and changed the second formula they were using because we didn't like it.

If you liked the original Chai Latte...and thought you'd never see it again..I have great news for you...

Posted by Mary Kirkland at 1:00 AM 3 comments