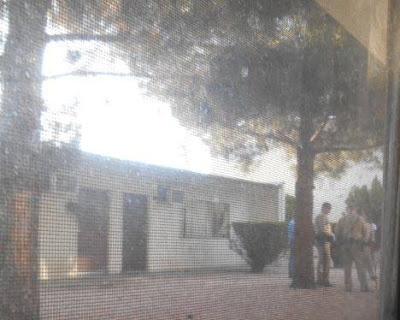 In July of 2016 Ken called the apartment manager and told her she should call to have a welfare check done on our next door neighbor because the smell coming from that apartment was really bad.  We thought the guy who lived there had died, that's how bad the smell was. So the manager called the police to do a welfare check because she didn't have keys to the apartment. No dead bodies just a refrigerator that had stopped working and the food inside had gone bad. They also left food out in a pan and it was bad and putting off a horrid smell.

The police and fire department were standing around outside and even said it smelled like a dead body.

There was a dog locked in a crate and no AC was left on for the animal so they called animal control to come get the dog. It was at least 100F outside so it was hot in that apartment. The manager told the people who lived there that they had to clean the refrigerator out but they didn't for an entire week. We complained to the manager so many times that she finally had the maintenance man remove the entire refrigerator from the apartment and put it in the dumpster. The maintenance guy asked Ken to help him get it on the dolly and keep the fridge door shut as they wheeled it out to the dumpster but as soon as they tipped it over to wheel it out the door...all this putrid water came out the bottom of the fridge and dripped all over the sidewalks all the way out to the trash can. Omg the smell! They had to hose off the sidewalks really good after that.

They were evicted the next month. They weren't even living here because the place was such a disaster and the female had just given birth to a baby so she moved somewhere else because it wasn't safe to live there. But the smell we had to deal with for so long was so bad. I can't even explain to you how bad it was. I live right next door to them and the smell was actually coming right through the walls! I took tape and taped over all of the electrical outlets on that wall and taped up my living room windows because the smell was coming in from outside as well.

We had my family over that week and they could smell it when they walked by their apartment and when they got close to that wall that separated our apartments. It was so bad.