On Friday around 5pm, Ken heard a police siren outside so he looked out the bedroom window and called me in there. He saw a cop running around this corner. By the time I got in there two more police cars showed up and they were bringing out a handcuffed man to a police car around the corner.

I don't know who the guy is, never saw him before. But all I can think is, "Pull up your pants." Looks like he's about to lose the pants any second. 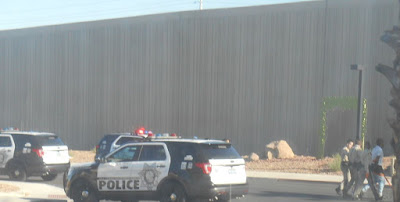 4 police cars showed up for this one but I have no idea who he was or why he ran. They caught him though. Ken was talking to the people across the street and none of them seem to know him so I have no idea. There's a lot of drug sales going on across the street so it could of had something to do with that but it's just speculation on my part at this time.

Oh and for those of you who haven't seen the huge wall in the background, that's the sound wall that separates the public street and sidewalk from the freeway right on the other side. It's a very tall wall. That sidewalk over there is where I walk Falcor.