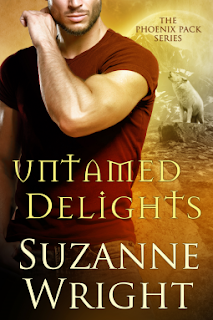 Return to the sensual and feral stirrings of the Phoenix Pack as a woman who’s already bound to one man is tempted by a wolf who’s bound only to his nightly desires.

Cat shifter Mila Devereaux can’t help but see it as a betrayal. That her one true mate imprinted himself on another female was hard enough to accept. Struggling to be at peace with her loveless fate, she doesn’t fight the suggestion of entering an arranged mating. Then she meets Dominic, a pack enforcer with a notorious reputation. It’s in his very scent. This irresistible playboy—and delicious badass wolf—is making Mila’s fantasies come alive again.

Alarming, compelling, and heady with sensual energy, Dominic is an expert at making women shed their inhibitions. Now everything about him—his killer smile, his perfectly sculpted body, and his smooth-as-honey voice—is drawing in a captivating new catch. But for the first time in his life, Dominic is feeling more than a fling. He finds himself tantalized by a female who makes him think of forever. He wants all of Mila and won’t be satisfied until he has it.

As the passion grows wild, so does the risk. They’re falling in love in the shadows and secrets of their pasts. And it’s threatening to destroy everything Mila and Dominic are fighting for. And are destined for.

Mila is a pallas cat shifter, which are badass little cats who will tear you to shreds if you piss them off. Most other shifters think of pallas cats as crazy animals who should not be messed with. They might be small but they are fierce.

Dominic is always having a fling with one woman or another and he's always making perverted remarks to those close to him. His sense of humor is weird but most people just shake their head at him and move on. Everyone knows that this wolf shifter is not looking for a relationship, just a one night stand so when he sets his sights on Mila she scoffs at him and turns him down, something he's not used to happening.

When Mila finds herself in danger because of something her brother did, Dominic finds that he feels more possessive of Mila and her cat than he thought he would. Mila has plans to move to Russia and engage in an arranged mating with a shifter there because of a certain person she wants to be away from but she isn't expecting to feel things for Dominic.

There's quite a bit of action because of the danger that both Mila and Dominic are in but that only added to the excitement of this story and it really showed both Dominic and Mila just how much they cared for each other when they other was put in danger or got hurt. It was fun to watch the relationship grow between them. I really liked the twists this story took because it kept me guessing as to who was behind all of the drama until the end of the book.

I've enjoyed this series so much and thought that this story closed the series out nicely even though I am sad to see the series end.