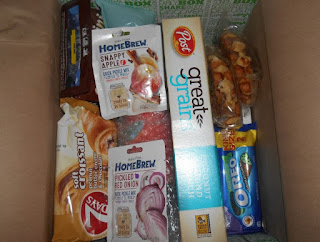 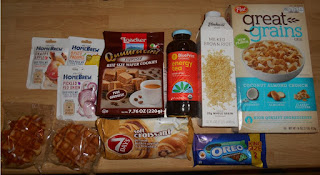 I used the Milked Brown Rice in my tea and Ken's coffee and it was ok in that. I tried to drink it alone and it wasn't very good.

I was really looking forward to those espresso wafer cookies but they were not even close to sweet enough for me, so Ken ate them. He loved them. Those waffles are so good. Ken and I each had one and we wanted more.

The Oreo cookie candy bar was good. It was the first time I had tied it. I liked the cereal and the tea drink as well. The croissant we're both on the fence about. I cut it in half and we both tried it but it was weird. Ken liked it but I wasn't thrilled with it. It would have been better if the filling had been throughout the croissant not jut blobbed out in the middle of it.

There are 3 pickling packets. I will probably give those to a neighbor if they want them. It's just not something I would use. One if to pickle an apple, another to pickle a red onion and another for another vegetable. Like I said, not something we would use.

It was a nice box of snacks though. I had someone ask me if we opened everything the day we get it. LOL The answer to that is no. We tried everything out over a 2 week period, on days we were both feeling like trying one of the snacks.


If you don't live in the US, they now have a Great Britain Website.