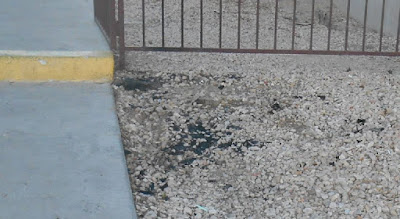 This week there was another idiot setting fires around my apartment complex. On Monday night my daughter and I saw a homeless guy burning books in the community bbq in the pool courtyard. He's not the same guy that was arrested last week with the burning shopping cart. Totally different guy. We figured he was trying to stay warm since the low was 34F this week. So we didn't think much of it until the next day. Tuesday morning I saw a bunch of burned clothes and books in the rocks next to my apartment building. I didn't get a picture of it until too late. The porter had come by and picked up most of the burned trash but I did get a picture of the burnt ashes that were left over in the rocks. All that black you see in the rocks is the burnt remains. The man was turned in that day by a neighbor and he was arrested but he got out the next day. 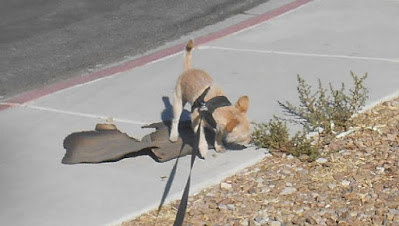 The day after that guy got out out jail. He was only in jail for one night. I don't know if it's because they didn't catch him red handed or what but the next morning when I was walking Falcor, I spotted more burnt cardboard down the street. I do not like knowing that there's a couple of fire bugs in the neighborhood setting fire to books, clothing and cardboard.

Falcor just wanted to scuff his feet on the cardboard but I don't like that people are setting fires in the neighborhood. I've kept my eye open at night when I take Falcor for a walk. If I see any fires I'm calling 911. This is ridiculous.
So that's it for this week's Apartment Hell  Life! Be sure to come back next week for more.
Posted by Mary Kirkland at 12:00 AM 50 comments