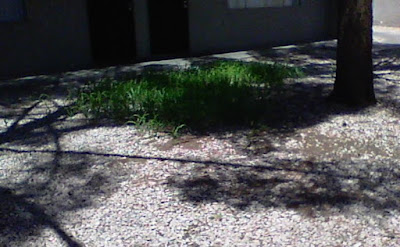 A few weeks ago we had a lot of rain and it's been raining a little each week since then. The neighbor who used to live right there used to throw out bird seed for the birds each morning. But she moved out over a month ago. After the rain, I saw that something right in the same area she used to throw bird seed started growing. 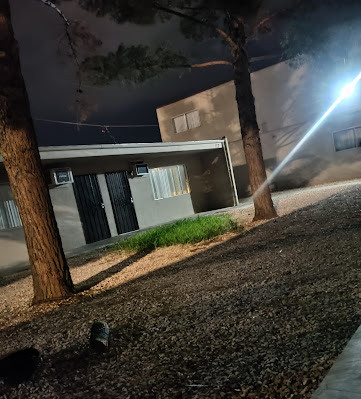 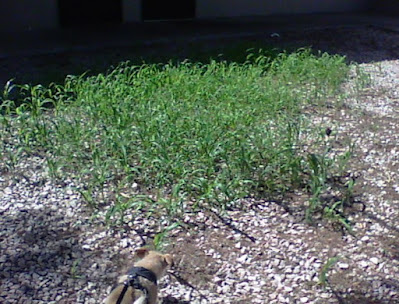 Yep, it's corn.  I had thought that maintenance would pull it up but it's already dying off now. There have been lots of clouds but no more rain.
--- 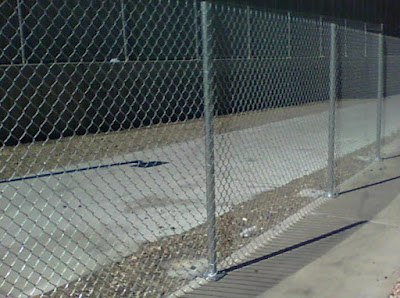 Back in May I told you in this post that someone had run into the fence that separates my courtyard from the walking path and it was destroyed. Well the city finally came out and fixed it last week. Here's our new fence. 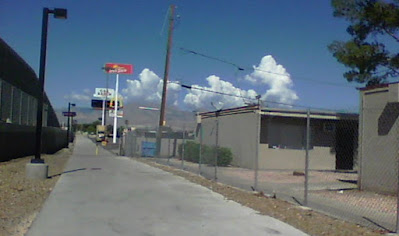 To the right is my apartment building and my courtyard and in the middle is the fence. The path that I walk Facor on is on the left and further left is the sound wall. I was just happy that they left a small section open down by the blue trash can so we can walk through the fence to get to the path where I don't have to walk up and down the steps. I have Osteoarthritis in my knees and hips and going up and down stairs hurts a lot.
--- 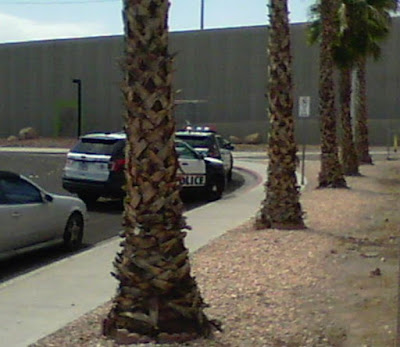 We can't end the week without some police car pictures. lol
My neighbors across from me down at the end of the building were fighting. One guy likes to scream at the top of his lungs when they argue. It's two guys that live there, roommates, brother's...not sure but they do fight like siblings let me tell you. Later that night when Falcor woke me up at 2am because he needed to go out, I stood in the courtyard with Falcor and could hear them yelling at each other again.
The high this week was 106F/41C
The low this week was 79F/26C
So that's it for this week's Apartment Hell  Life! Be sure to come back next week for more.
Posted by Mary Kirkland at 12:00 AM 48 comments