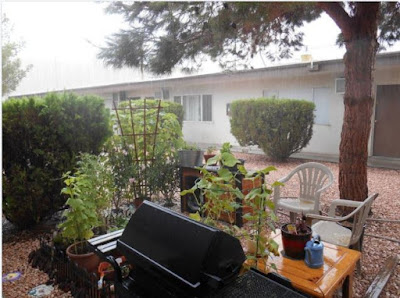 Back in 2016 we had a neighbor who lived right next door to me. We didn't get along because she was hooked on heroine and did some really stupid things. She played her music really loudly and would pass out in her apartment and leave the stereo up really loudly for hours.

So she wanted to put out chairs and tables and a garden in front of her door but since her door was right next to mine, we shared the space in front of our doors. She asked me on more than one occasion if I would remove my bbq because it was in the way of what she wanted to do with the space in front of our two doors. I refused and said she could have half the space same as me. My bbq in that picture sat directly in front of my door. All that space on the left hand side all the way over to the bush was hers. But she had to invade my space. Big mistake.

She filled both of our spaces with chairs, a dog house, a table, and so many potted plants that there was no room at all in our space for anything else. She put some of her plants so close to the back of my bbq that you can see in this picture that they got burned when I lit my bbq. I hardly ever used the bbq but she pissed me off so badly that I bought two huge bags of briquettes and bbq's every single day for 2 weeks. It burned all of the plants that were directly touching my bbq and scorched the wood table she put on the right side of my bbq. She also couldn't keep her door open for the 3-6 hours that I was bbqing each day because all the smoke would blow into her apartment. I slow cooked a couple of roasts in the bbq for 5-6 hours a couple of days and she was really mad that she couldn't sit in her chairs out there.

If she had just stuck to her side like I told her too, I wouldn't have had to go to bitch mode but she had no one to blame but herself. She ended up being evicted when she didn't pay her rent for 2 months. Spent too much on heroine I guess.