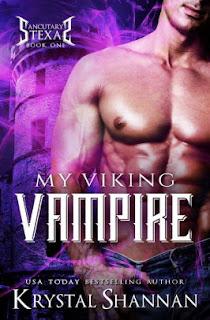 She’ll fight them to the end…
…Or die trying.

With enemies closing in on her, Bailey Ross has nowhere to run–except into the arms of a sexy stranger, who promises to keep her safe.

But the irresistible and mysterious vampire, Erick Thorson might be a little more than she bargained for. As they begin to grow closer and their chemistry ignites, they realize that their lives are more in jeopardy than ever before. Can Erick live up to his promise of sanctuary in a world of danger and doom?

Bailey Ross is on the run from her abusive ex. But he is an investigator for SECR Southeast Coast Republic and his job helps him find her even though she keeps moving to try and stay away from him. Right from the very beginning we find out that the supernatural species came out and stopped living in the shadows about 50 years ago. The supernaturals are known as Others now and some Republics have banned them from becoming citizens. Not everyone is welcoming the Others even though they've always been around. Things really changed for the worst after that and now women are often married off between the ages of 17 and 18 usually and those who aren't married are little more than prostitutes that live in brothels.

Not only is Bailey on the run from her ex but she now has to contend with a Djinn, that's when Erick runs into her and helps her. Erick let's Bailey know that the Djinn is stalking her and she's in danger. He's going home and offers to take her with him to a place that the Djinn isn't welcome. She has no money, no family and no other choice so she accepts.

They go to a place called Sanctuary and a lot of Others live there as well. I really liked how welcoming everyone was to Bailey and how easily she fit in with everyone.

The town was interesting, it had a cafe, a clothing shop and a castle that was also a fetish club. All of these places were owned and run by Others who had really interesting powers. Because Bailey had been beaten and abused by her ex, she wanted nothing to do with the fetish club. I really liked how comfortable she felt with Erick, how safe he made her feel and how easily they just fell together so fast. She isn't used to trusting anyone and it took her some time to trust him but I can understand the yearning to feel safe and replace the horror she's lived with happy, safe feelings.

Things are going really well and she and Erick are getting closer when they find themselves and the town in real danger. There's a huge twist in this story and I loved it because it really fit, things get wild and it's not hard to see how she was meant to be there all along. I loved the ending, it was everything I could have hoped for with this story and I'm looking forward to reading more of this series and getting to know these characters.