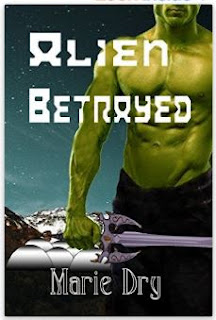 
In a bleak and apocalyptic future, where the Zyrgin Warriors are getting ready to conquer Earth, Marcie is sent to infiltrate the alien stronghold in the Rocky Mountains, only to be betrayed by her own people. Instead of stealing the alien’s technology and accomplishing her mission of causing mayhem and destruction among them, she is captured by Larz, an arrogant alien, who wreaks havoc with her heart when he insists that she will be his woman. Still, he may no longer want her when he discovers her secrets…ones she doesn’t even know she has.

First off I need to state that I didn't read the first two books in this series, so I felt like I was missing parts of the whole story. Not that it made it bad in any way, just felt like I was missing something or not really knowing some of the characters the way I should have but this story can be read by itself. While this is the first time I've read this author, I doubt it will be the last time.

Larz captures Marcie when she is sent on a mission to stop the aliens. In this book breeders are what the aliens call their wives and Larz decided that he wanted Marcie to be his. But after the deal is sealed and they have sex for the first time, she wakes up only to find she can't remember anything, not even who she is or why she's there.

Larz and the other aliens don't believe that she's got amnesia but she really is a totally different person. Marcie was a cold bitch and I really disliked her but there's more to her than meets the eye. While she's done some awful things, there's a reason and when it's revealed I was shocked. She's had a harder life than anyone knew and it really put things into perspective. She's been betrayed so many times, it's no wonder that she has a hard time trusting Larz at all.

I absolutely loved Larz, and even though Marcie compares him to a giant lizard all the time, he has a heart of gold. His species doesn't show their emotions often and his people kinda reminded me of Klingon's in the way they hold honor above just about everything but his was a great character.

You'd think that aliens coming to take over Earth would be a bad thing but humans have used up the resources and wild animals were darn near extinct because of us. So it was actually a good thing for the aliens to come, conquer and use their closely guarded technology to make Earth whole again, all the while not killing off the human race. I think this was a fabulous story and the ending with so many twists will leave the reader smiling like it did me.

If you'd like to read this one, you can find it here.

Disclosure: I was given this book free of charge but all opinions are my own.
Posted by Mary Kirkland at 12:00 AM 16 comments