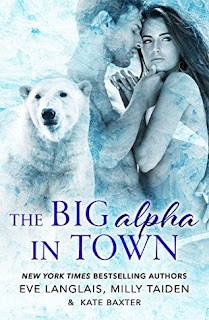 Bearing His Name
Meeting his mate should have been cause for celebration. There’s just one teeny tiny problem. Jade thinks Ark might have impregnated her sister. He didn’t, but convincing Jade is going to take a bit of honey.

Owned by the Lion
Keir’s been told to stop playing the field and settle down―difficult advice for a hard and hot man with a lion’s heart to follow. But his sights have always been set on Ally. She’s his mate, plain and simple. With her sweet and delicious curves, she’s nothing but sugar and trouble all rolled into one. But he’s known her and sparred with her for years. She’s his best friend’s little sister, and it’s going to take a whole new level of convincing that he’s the mate for her.

No Need Fur Love
Moving with his pack to the tiny town of Stanley, Idaho has Owen Courtney a little on edge. With literally no women in sight, Owen will be lucky to find a date, let alone his true mate. But you know the saying about a werewolf walking into a bar…
Gorgeous wood nymph Mia Oliver is on a mission: Find a suitable male to get her good ‘n pregnant and provide her with an heir. But when Mia decides to pick up a gorgeous and oh-so willing werewolf at the bar, she realizes she might be in over her head. …

Since this is a 3 story anthology I'm going to do a mini review for each one.

Some of Ark's male family members were sent a card that pretty much accused them of getting a woman pregnant and then disappearing. Ark decided to track down the woman and find out who the father was. Jade sent the cards out to find out who knocked up her sister. When one of the men, Ark showed up to her door though, she and her sister were more than a little shocked. Now they just needed to figure out which of his cousins was the father of her sister's baby. Of course the pregnant sister also has a crazy ex who is stalking her and doesn't know how to take no for an answer. There's a great twist to the pregnant sister's story. I was really happy that both Jade and her sister had a completion to their stories.

Owned By The Lion

One of Ally's friends runs a shifter dating site and they convince her to sign up because she needs the money she'll get for the cancer treatments her mom needs. Keir is known for dating a new woman each day but never settling down but he knows instantly that Ally is his mate when he meets her. The only problem is that she doesn't like him much. So when they are matched on the dating site, he feels this would give her time to get to know the real him. I really liked him and their interaction, they fall in lust pretty fast but it was a fun read.

Owen and his pack moved to Idaho to expand their territory. He was on the look out for a one night stand but didn't expect to find forever. Mia on the other hand just wanted to find a willing male to give her a baby. He's a werewolf and she's a wood nymph, not exactly what the other thought their forever mate would turn out to be. Mia needed an heir to secure her birthright or her father was going to marry her off to someone not of her choosing. Things don't go exactly as Mia planned but they couldn't have turned out better. I really hated her jerk of a father but she got even with him and he never saw it coming.

This anthology was great. I enjoyed all 3 of these stories. I give this book a 4 out of 5 stars.