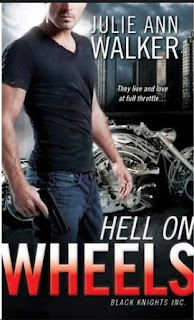 Black Knights Inc.―Behind the facade of their tricked–out motorcycle shop is an elite special ops team assigned the jobs too hot for anyone else to handle.

Ex–Marine Nate "Ghost" Weller is an expert at keeping his cool―and his distance―which makes him one hell of a sniper. It's also how he keeps his feelings for Ali Morgan in check. Sweet, sexy Ali has always revved his engine, but she's his best friend's baby sister...and totally off limits.

Ali's never seen anything sexier than Nate Weller straddling his custom Harley―or the flash of danger in his eyes when she tells him she's in trouble. First something happened to her brother, and now she's become the target of a nasty international organization. With Nate, her life is in the most capable hands possible―but her heart is another story altogether.

Nate and Ali's brother go on a mission, only Nate made it home alive. He goes to tell Ali and her parents about Grigg and Ali finds herself once again falling for Nate, whom she's been attracted to for a long time. Nate has always had a thing for Ali but he made a promise to her brother that he would keep his hands off her. So he pushed her away even though they both had feeling for each other. Ali goes to him when she thinks that she has a stalker and it turns out she's right. Someone is after her but she has no idea why.

There's so much going on in this book and so many characters to keep track of and I found that distracting. Ali's stalker was the only real interesting part about this story because Ali and Nate are just not likable characters. I had problems with both of them for different reasons. I usually like a broody character but Nate is more than broody and his personality got on my nerves. Ali is so naive and proper and just didn't fit with the kind of guy that Nate is.

This story is very graphic also and in some cases it seemed that the graphic nature of the story was for shock value and didn't really add to the story at all. While this book did start out slow it did pick up towards the end and the story line was interesting but I'm not sure if I would continue with this series.