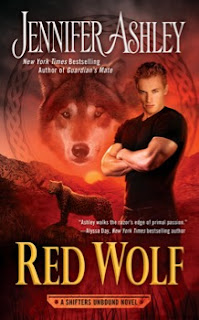 A man is only as strong…

Red wolf Shifter Dimitri has fought his whole life for respect. It is claimed that red wolves are tainted with coyote blood and therefore not pure. He may not be skilled at verbally defending himself, but because he's a bodyguard, tracker, and champion of the fight clubs, his fists are always ready for some rough and tumble. However, he’d prefer a roll in the hay with the woman who is his oldest friend.

…as the woman who’s got his back…

A spirited leopard Shifter and a fellow tracker, Jaycee Bordeaux has no problem forging a mate bond with Dimitri, but soon the two are called to infiltrate a rogue group bent on enslaving Shifters. Jaycee may have defended Dimitri from taunts before, but they now face a more lethal danger—one that threatens not only the future of their people, but also their love.

Dimitri knows that he and Jaycee are destined mates but she hasn't accepted or denied the claim as of yet. So when they get sent on a mission together, I knew some sparks would fly and it wouldn't be from their fake collars.

While they're off on their mission they stay in Jazz's house, which seems to be alive and has a distinct personality. The house and their interaction with it was the first thing I liked about this story. While it starts out a little slow, it does build up to some really good action, a little mystery and a lot of naughty fun between Dimitri and Jaycee.

These two find themselves among shifters they aren't sure they can trust and even though they seem to be nice and not out to hurt them, things aren't always as they seem. There are a few twists, new people to this series are showing up left and right and a Fae lady actually does something nice when a couple of shifters find themselves in need of help.

It's obvious that a war is brewing between the Fae and the shifters but when it will happen and exactly what will happen is a mystery.

As a person who has been reading this series, it was nice to see so many of the characters from previous books show up in this one. It was also nice to see new characters emerge and I can only hope to see some of these newbies again in upcoming books.