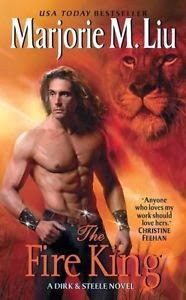 Long ago, shape-shifters reigned as gods.But even gods have laws that they break at their own peril . . .
Each member of Dirk & Steele has a unique ability. Soria's is the gift of communication—which is why she's been chosen to learn the language of a tormented warrior resurrected after thousands of years of icy sleep.

He is Karr, and once he was a king. Strong as a lion,quick and deadly as a serpent, he saw everything he loved consumed in flames. Death was to be his salvation,but thousands of years later he has been awakened against this will. Now a breathtaking human moves him in ways he neither understands nor desires. But Soria can see beyond his rage . . . and only she can speak the words that will cool the destructive fury in his soul.

Soria has been held up in her home since losing her arm a year ago. Not wanting to work, be around the people she used to work with but instead keeping to herself. That is until she is brought in on a new assignment to try and speak to a very old shape shifter because she has a special skill of being able to speak any language when she is in the same room with the person speaking the language.

Karr is a 3000 year old shifter, a chimera. Most thought he was dead until he was found and brought to the facility where Soria meets him for the first time. He's not sure whether to trust her because she can speak his language or not but he's more than a little mad that he's been imprisoned.

I expected more from this story right from the beginning. I read the first chapter hoping that things would pick up, but sadly they didn't. This book left me wanting more. More storyline, more plot, more insight into the characters, more sex, more cohesiveness...just more.

I found myself having a hard time even finishing this book but I did and while it did pick up just a little at the end, it wasn't enough to save this book. I could not connect with the two main characters at all, character development could have been improved. They were not memorable in any way. They were not exciting even during the small sex scenes. This is labeled a romance but there was very little romance and even less sex in this book. The sex scenes were stale and unexciting, not what I would hope for in a romance book at all.

Plus it wasn't at all believable and there were plot holes a plenty. Soria only has one arm but she doesn't asked for help getting dressed, putting her hair in braids or anything else. Karr has been asleep/dead for 3000 years but he barely blinks at how much has changed. I found that to be utterly ridiculous.

All in all this was a very disappointing read and had I not read other books by this author knowing that she has written better books, I would not be reading another from her.