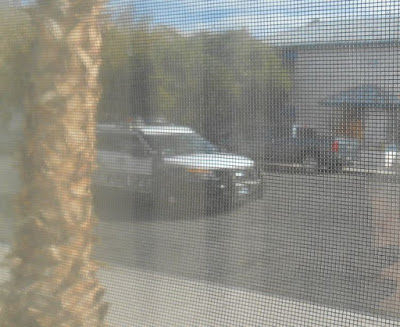 Last week there was a big fight in my courtyard between 3 of the neighbors and the police were called but only 1 person answered their door who had been involved. They told the police that the man who had hit her and her boyfriend took off and was walking in the neighborhood somewhere, so the police drove around the neighborhood for about an hour looking for him. We saw police driving up and down the street and in the alleys for a while. I don't know if they found him though because he hasn't come back around here for the past few days.

The woman who had been hit by him decided to take herself to the hospital a few hours later to get her eye looked at after refusing the ambulance while the police were here. I took the picture from my bedroom window as one of the police cars drove by.