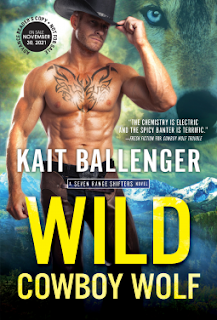 Book Description
Blaze Carter is the cowboy wolf with the most dangerous desires. One of the wolf ranch's elite warriors, the Grey Wolf security technologist is as smart as a whip, the quickest to joke, and the first to act on his impulses—carnal or otherwise. But this cowboy has a dark secret he can never escape, and Blaze fears the day when his demons catch up to him.
Dakota Cassidy has everything a she-wolf could ever want—an appointment as one of the pack's first female elite warriors, a career as the ranch's veterinarian, and an endearing family that's equal parts loveable and trouble. There's just one thing missing—someone to share it with. Enter: Blaze. For the first time ever, Dakota's now seeing her best friend in a whole new light. But to act on her desires could have deadly consequences for them both...
My Review
Blaze is an elite warrior but he has some secrets that are about to catch up to him. Dakota is his best friend but he's been in love with her for years and she has no idea until she decides she has feelings for him.
Dakota is also an elite warrior, one of the pack's first female's to have the job but she wants more. She wants someone to share her life with, she just never considered Blaze to be that person until now.
When a friend of Blaze's comes to warn him that his secrets are about to catch up with him and he could be in danger along with his pack and anyone close to him, he decides to tell his alpha. Blaze had been sent on a mission that still haunts him. He had been sent to Russia to infiltrate the Volk who are sadistic, murderous, sociopathic wolf shifters that were thought to have been extinct. He was able to join their ranks and be the spy he was sent there to be and report back to his superiors about them but in doing so he made an enemy of the Volk and still has nightmares about what he saw. So when he's warned they might be coming for him, he's worried.
When Dakota finally realizes she has feelings for her best friend, Blaze and that he loves her too, they try to take things slow but end up being together because they know they are meant to be mates. But the Volk are coming so they can't put as much into their relationship before the attack happens.
Blaze tries to prepare his pack for the arrival of the Volk and the vampires that come along to attack them but they didn't have enough time to prepare and there are some losses when they are attacked. Blaze blames himself and does something stupid to try and keep the rest of the pack safe.
This was an interesting twist on shifters, a different kind of shifter and vampires. I like the story of how the Volk came into being and how this ended. I've been reading this series for some time and I usually really like the books but while I really liked the 2nd half of this book, the first half was slow to get going. I'm glad I stuck with it though because the story does pick up and get a lot better. The action in the second half is great.
I give this book 3 out of 5 stars.
Disclosure: I was given an e-ARC of this book via NetGalley but all thoughts and opinions are my own.
Posted by Mary Kirkland at 12:00 AM 22 comments