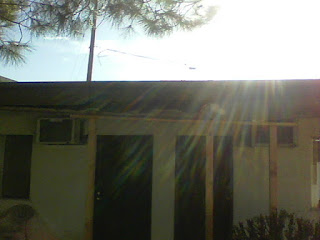 It rained one night and the next morning the overhang in front of a couple of apartments had detached and was ready to fall down. Instead of bringing the whole things down they decided to take wood and prop it up until the next day when maintenance got here and fixed it. It was quite dangerous and could have fallen on someone. 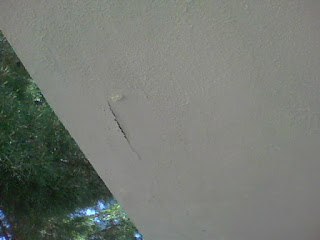 These are just a couple of cracks in the over hangs over the walk ways and instead of fixing it, they had someone come out and put in staples and paint over it. 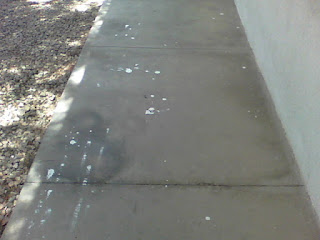 They got paint all over the walk ways when they did it. 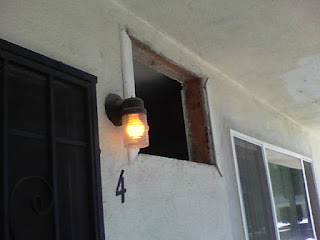 Sometimes when an apartment is vacant, they will take the air conditioners out and put them in other apartments if the AC goes out. Instead of putting a board over the huge hole, they left it open for weeks and we let the manager know that homeless people were crawling into the apartments through the holes and spending the weekends there. 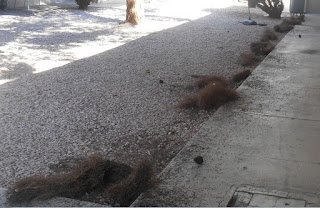 This might be one of the reasons that the overhangs gets soaked through and fall down. They hadn't cleaned the gutters for 3 years. That's pine needles from the pine tree's. 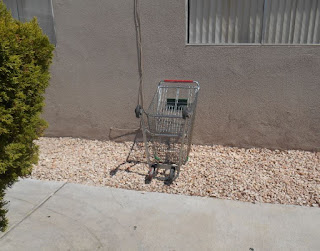 We only have someone come by once a week and pick up trash from the complex so this shopping cart and other trash ends up staying where kids and people throw it until the grounds people come and remove it. 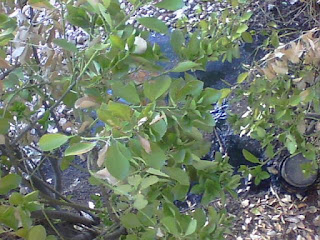 These pictures are taken right out my bedroom window. This black sludge is raw sewage leaking right out of the sewer pipe that the plumbers use to snake out our apartment building's pipes when they back up.

I had the smell of raw sewage coming in through my bedroom window even with it closed, for the entire weekend because the apartment manager wouldn't answer her emergency phone or door on the weekends. She says she has the weekends off and unless the place is burning down, don't bother her. She wouldn't even answer the phone.

So Monday morning Ken told her and the maintenance man about the problem and she called the plumber but she had no intentions of cleaning up the raw sewage that had already leaked out under my window, so Ken was out there with a shovel and bucket and was shoveling it up. 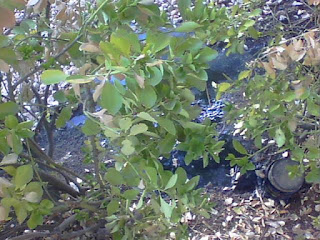 The bad thing was it's not even the only time it happened. The sewer pipes for this entire complex are really old and they back up all the time. If you look closely at the bottom right hand side of this picture you can see the black pipe that had a broken cap on it that the sewage leaked out from. This happened several times before they got a cap that fit this pipe. Then last year the bigger pipe in the alley overflowed with so much sewage that someone called the news and they came out and interviewed people here about it because it went on all weekend again before the plumber was called out to fix it.

So that's all for this week. Come back next week for more Apartment Hell  Life!