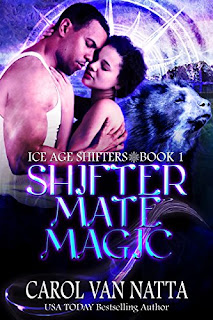 A lonely bear shifter meets his mate. She’s running for her life and doesn’t have time for romance.

Pregnant Jackie Breton just escaped from a corrupt feline pack intent on selling her half-shifter baby to the highest bidder. She’s smart, independent, and has a desperate plan to keep her baby safe: Get away from the pride as fast and far as possible.

Trevor Hammond, prehistoric bear shifter, has been rejected by everyone in his life for… being born, basically. Well, except for the beloved aunt who raised him. He’s built a career as an independent trucker, but life would be much better with someone he can hold in his arms and claim as his own.

When Jackie meets Trevor at a truck stop, his bear demands he help her. His aunt even calls with a dire warning: Get Jackie to the magical sanctuary town in Wyoming before she’s killed.
Jackie thinks he’s sexy as hell, but too good to be true. She doesn’t trust shifters. With the feline pride hot on her trail, however, Trevor and the quirky town of Kotoyeesinay might be her only chance for survival. Even Trevor’s indomitable bear may be no match for the dangerous enemy seeking retribution.

This is book 1 in the Ice Age Shifters series and when I saw it was free on Amazon I went ahead and took a chance on it.

This story is told from both Jackie and Trevor's point of view, which I liked. Seeing what they were both thinking really seemed to add to the story. Jackie ran from her pack because they planned on selling her half shifter child to the highest bidder once it was born. Trevor and Jackie meet, exchange names and he hands her his card in case she ever needs help. They're attracted to each other but she doesn't trust him right away and he knows he has to move slowly with her. So when he gets a call from her, Trevor goes to help her. They want to get to the magical sanctuary where she's hoping they can help her but she's human, not a shifter so I had no idea how that would end up.

I thought the world this author created was great and I liked that these shifters had magic to be able to shift and for use for other things as well. I loved the sanctuary town that they ended up in and all of the different types of mythical creatures there and how welcoming they were.

Jackie and Trevor are so great together. He's an alpha male for sure but he's got a kind heart and it shows. Jackie is obviously a kind hearted woman and just wants to make sure her unborn child is going to be safe. My heart melted when Trevor said that he would love her child as his own. When they did finally have time to be alone and really get to know one another, *wink wink* they were so sweet together. I hope we get to see them again during the series.

I was trying to figure out the whole ice age thing in the series title when I finally figured out that some of these shifters actually shift into ice age animals and then it all made sense. I loved that aspect of this book and plan on reading more of the series to find out more. This was a quick read but it didn't feel rushed at all. I'm really looking forward to getting to know more of the people in this town.