Have you heard of smiley360? If not, you're missing out on free products that you get to test at home and get to keep. All you have to do to get them is sign up and wait for them to offer you products to test at home. I've been a member of this site for over a year and have tested and kept over a dozen products including food, kitchen and bath products and baby products. If you've ever wanted to get free products at home to try out and keep, this is the easiest site to do it through.
Posted by Mary Kirkland at 7:11 AM 4 comments

My friend Anna, is having a month long celebration on her blog, Herding Cats & Burning Soup. You can also find details about this celebration on the FB Group page. Starting today December 1st through January 7th you can win ebooks, print books, signed goodies and other prizes. Herding Cats & Burning Soup is turning 2 years old in January so this is also a Birthday celebration. Come on by and chat with us this month.

I Was A Horrible Kid

When you think back on your earlier years, what do you remember? I remember that my brother and I went through a really awful stage where we physically fought with one another, so much so that our mom had to call the cops on us a couple of times.

When we lived with our dad and step mother we were always playing jokes on her. My younger brother would go to the magic store in the mall and buy these things you can stick into cigarettes that when the fire hits them, they make a loud POP! So my brother would stick them into her and our dad's cigarette's but not all of them just a few at a time so they never knew when one was going to POP in their cigarettes.

We thought that was so funny.

Then we would get things like sugar cubes that had tiny plastic bugs in them and put those in her sugar bowl. You can't really see the bug until the sugar melts and the plastic bug floats to the surface.

My brother found a small green snake outside one day and put it in our step mother's underwear drawer. She just about had a heart attack.

My brother found things like chewing gum that would turn your tongue and mouth black and would offer a piece to my dad right before work.

And probably the worst thing we did was replace my step mother's Woolite *for her white under garments* with a clear detergent that turned everything light blue. She did NOT find that funny.

I don't know where we got the ideas from to do these things but I remember the first really bad thing I did when when I was about 6-7 years old and my mom got mad at me for some reason and yelled at me. So I took the large salt container and poured salt around the entire outside of the carpet, right up against the wall, where I knew it would be hard to vacuum up. That day I also took a bite out of all the donuts in the box. LOL Mom was not amused. 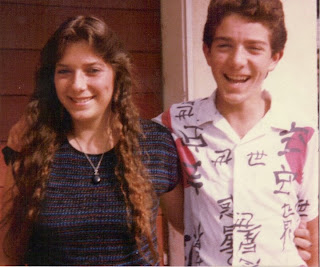 We don't look evil...but we sure did some awful things when we were younger. I was 16 and my brother was 14. Oh yeah, we were definitely trouble makers.

So tell me...what kinds of things did you do to get in trouble when you were younger?