A To Z Blogging Challenge: I Is For Insects of Las Vegas 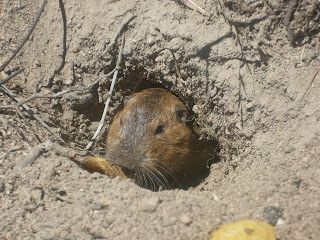 While there are many insects here in Las Vegas, I haven't seen many of them and would much rather look at this gopher that my daughter found when she and my brother went fishing. She fed him chips and peanuts.

Of the few insects here in Las Vegas that I have seen, I think the worst one I've seen is the scorpion and thankfully it wasn't in my house, is was at my brother's place when he lived in Pahrump, Nevada.

I woke up, took my bag in the bathroom, turned on the light and it was sitting right on top of my bag. Good thing I didn't reach inside with the lights off. o.o

I put it under glass so when everyone else woke up they could see my find. Yuck! Nasty little buggers.

I've also seen many, many spiders. I even found and caught a Black Widow spider a few years ago so I could look at her and get over my fear of spiders. Yeah, great idea, I don't recommend doing that. But I looked at her and then put her back outside. Now I can pick up spiders and most other insects without being afraid. Most other insects..just not bee's.

I don't like bee's. No, that's not right. I have a full blown bee phobia. Bee's, wasps, yellow jackets, hornets, bumble bee's, ...doesn't matter, they all scare the bejuju's outta me.

There are any number of insects that irritate me..the ants drove me nuts last year. I tried all sorts of things and they just kept coming in. Then when I caulked up the entire bathroom...they grew wings and started flying down the vent. I kid you not!

My younger brother thought I was insane when I told him that I thought the huge red and black ants with pinchers on their face were fighting near my bathroom vent and throwing their enemies eviscerated and headless bodies down the vent and into my sink. I kid you not, I kept finding ant body parts in my bathroom sink because it's right underneath the vent and so if an ant tossed a headless ant body over the ledge into the vent, it fell into the sink. Nice...

I had to put window screening material under the vent so bugs couldn't fall into my bathroom if they got into the vent. If it were up to me, I would just nail a piece of wood to the ceiling and cover the whole vent. lol

I took the caulking gun to every nook and cranny in that bathroom last year and then when my husband saw my bad caulking job...O.o...he asked our daughter to caulk around the baseboards so I didn't do that too. lol

Hey, I got the job done, no more ants!

Oh and on a side note...the ants started coming in through the vent again about a week ago, so I badgered and nagged my husband until he took some really sticky tape and permanently taped up the bathroom vent. Problem solved, I haven't seen an ant since. LOL