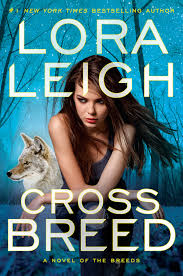 The Breeds are humans altered before conception with the DNA of the predators of Earth. But although they all carry the genetic material of beasts within them, Cassandra Sinclair stands apart. A unique mix of wolf, coyote and human, she is revered by many—but preyed upon by others. She is fiercely protected by her community…but no one manages to stop her when she slips away one day to offer her body in exchange for her sister’s safety.

The man she succumbs to surprises her by unleashing her inner animal in ways she never dreamed possible—and provokes her deep, furious rage. To Cassie’s shock, he is the mate she has long awaited. She may never be able to forgive his deception. Still, as dangerous enemies track her, and as the threat of all-out war between Breeds and the humans who despise them hovers in the air, they must join forces and hold fast to each other.

Cassie has had a hard life and not just because she's a hybrid wolf/coyote breed. She's kept secure so the bad guys can't get their hands on her and experiment on her. But her mate finds her and they begin to play a cat and mouse game that spans a few years until they finally meet. She has no idea that Dog is her mate until they are together and then there's no denying it. But she's furious that he lied to her and he knew all along that they were mates.

Dog is a wonderful character and exactly what I wanted in a mate for Cassie. He's lethal, strong, smart and even though we think he's working for the council, we find out things are not exactly what they appear to be.

I was completely blown away by this book and the twists this story line took. I did not see that ending coming or how they would find out who Dog was or who was pulling the strings behind the scenes. I also loved finding out who the angel spirit was that Cassie had been talking to. That revelation was actually heartbreaking in a good outcome sort of way.

Oh and Graeme makes an appearance which I loved since he is one of the most interesting characters in this series.

This book takes us on an emotional journey filled with action, fighting, love and of course the mating heat. There's always some kind of drama because of that mating heat with these Breeds but it always seems to work out in the end.