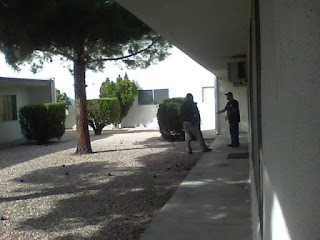 Back in 2014 we had a neighbor who would call the police on himself all the time. I had called the police 2 nights prior to this incident because he started screaming and yelling at no one because no one was around...but he claimed that the managers son had threatened his life and he wanted a restraining order. So this guys calls the police, I know this because he was outside while he was screaming at dispatch on his phone. No one went to jail because the incident never happened. This guy has brain damage from an accident and his mother pays for all his bills but in the mean time he drove us all crazy and because of the way he acted all the time the manager finally evicted him. He lived 2 doors from me so we got front row seats to the insanity.

Update for this week: