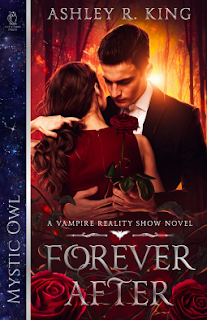 Book Description
On the Vampire Reality Show, Forever After, an immortal bachelor isn’t the only plot twist.
Autumn Reid is in a rut. At nearly thirty, she hasn’t ventured outside the small town of Covey Crossing. When she spots an ad for a new dating show, Forever After, she jumps at the chance for adventure. But this show has a paranormal surprise—a vampire bachelor.
With the winner receiving cash or immortality, it’s an enticing prize. But Autumn doesn’t expect to get that far, she just needs a change from her dull life. Falling for the hot vampire duke isn’t part of the plan.
Impoverished duke Oliver Gray desperately needs money to save his estate. When he’s offered the bachelor spot on Forever After, he has no choice but to accept. But there’s a catch—he must wear Victorian clothes and pretend he’d been hibernating for the last one hundred years.
Fine. He can don a top hat and fake clueless. But a feisty human with a smart mouth? That’s more than he bargained for, especially when something deep inside insists she’s his fated mate.
But Oliver and Autumn’s dreams of love and romance may be cut short when a killer takes out the contestants one-by-one. As the show’s finale nears, will they get their forever happily-ever-after?
My Review
Autumn feels like her life is going nowhere so she chooses to go on a vampire dating show to change things up a bit, never intending to win. But then she meets Oliver, the vampire and her mind slowly changes about him and about winning.
Oliver doesn't want to do the dating show but he needs the money to keep from losing his home so he agrees to go along with the producers on how they want him to act and the show to progress. But the show is thrown for a loop when people start being murdered.
So when vampires came out of the shadows and humans know they and some other paranormals exist, Oliver lost a lot of money because his stocks went down so now he needs to make money to keep his family home. A vampire dating show sounds like a great idea because there are some humans that want immortality or money and those are the choices for the winner of the show.
The attraction between Autumn and Oliver wasn't instantaneous and I really liked that. It took some time for them to get to know each other and find that they liked one another. But I did think it was weird for the show to keep going forward when people kept turning up dead.
The setting though was way too cute. There were bat messengers, hearse transport cars and bed coffins but it wasn't creepy at all. Finding out who the killer was and why was fun because I never saw it coming. This was such a fun vampire romance.
I give this book 4 out of 5 stars.
Disclosure: I was given an e-ARC of this book via NetGalley but all thoughts and opinions are my own.
Amazon
Posted by Mary Kirkland at 12:00 AM 22 comments