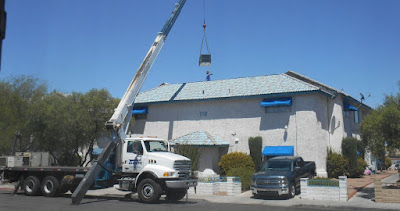 A couple of weeks ago I told you guys about the woman and her adult son being evicted from these apartments right across from me. Well, she moved on to her section 8 apartment but not before she saw this last week being done.  Last week she knocked on my door and was fuming because she said she had been complaining about her air conditioner not working right for over a year and the manager wouldn't do anything about it because he said it worked, just not as well as she wanted. So when she saw that a new central air conditioner was being installed for the apartment she just got kicked out of she was so mad. They waited until she was evicted and then they put in a new air conditioner. 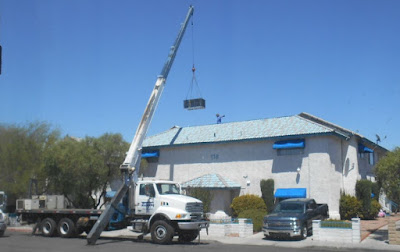 I don't blame her for being mad, I would have been mad too but I really think she needs to move on from this. She needs to stop gambling her money away and get her shit together. She's almost 70 years old and her son is a meth addict so I think she'll have more problems since he moved in with her.

So that's it for this week's Apartment Hell  Life! Be sure to come back next week for more.
Posted by Mary Kirkland at 12:00 AM 37 comments