What Do You Know About Shingles?

I've never known anyone who had Shingles but the medical professionals say that if you've ever had chicken pox the virus for shingles is inside you and can trigger a shingles outbreak at any time. A couple of weeks ago my husband Ken got an ear ache and then that side of his face swelled up. 3 days later he got a bad rash on that side of his face and I thought for sure that he had a staph infection. He went to the ER because his doctor couldn't get him in for a couple of weeks and the ER doc told him he had Shingles and that it was a bad case because he had them in his ear and he might lose some or all hearing in that ear. Not only were the shingles in his ear, and in his hairline on his scalp but they were in his mouth on the inside of his cheek and at the back of his throat. 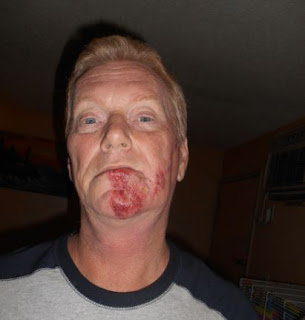 Ken, just 3 days after the symptoms started. The redness actually got worst a few days later even though he was on medication. He was not feeling good and not happy that this was on his face.

To make matter worst, Ken has a compromised immune system because he has AIDS. He was told they can take anywhere from 2-8 weeks to go away completely and they wanted to keep a close eye on him, especially his ear. So since his doc couldn't get him in for at least 2 weeks the ER doc told him to come back to the ER the next week and get a check up to see if the medicine is helping.

Thankfully when he went back to the ER they said that it was slowly clearing up but it would be a few weeks before they knew if his hearing would be alright, so we are still waiting on that.

Did you know that Shingles can be contagious? That's right. So the ER doc told Ken to have my doc come out and give me the shingles vaccine. *I have a visiting doctor that comes to see me every couple of months since I have Agoraphobia and don't leave my apartment*

Did you know that is the blisters aren't properly treated they can lead to bacterial skin infections? It's very important to see a health care professional. They told Ken he was lucky that it was attacking the lower part of his face because when it attacks the top part of the face it can go into the eye and you can have vision loss from this.

So what did they give him to treat this? 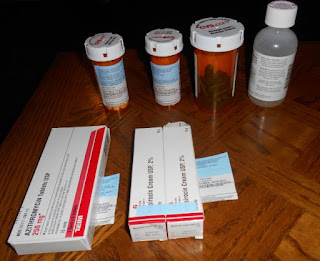 They gave him 6 different prescription medications to treat this.

Thankfully the rash is getting better and he can still hear out of his ear so we are hopeful about that too. Have you ever known anyone who got Shingles? No? Now you do. Get the Shingles vaccine. I did.

Updated to say: I thought I was going to get the vaccine but my doc came back to tell me that my insurance wouldn't pay for it because it isn't recommended until you are 60 years old. Kinda crazy when I'm living with someone who has it.
Posted by Mary Kirkland at 12:00 AM 28 comments