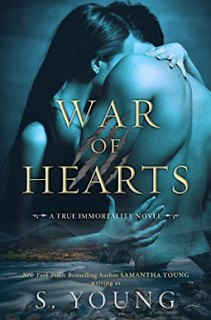 Thea Quinn has no idea what she is. All she knows is that her abilities have been a plague upon her life since she was a child. After years of suffering at the hands of a megalomaniac, Thea escaped and has been on the run ever since.

The leadership and protection of his pack are of the utmost importance to Conall MacLennan, Alpha and Chief of Clan MacLennan, the last werewolf pack in Scotland. Which is why watching his sister slowly die of a lycanthropic disease is emotional torture. When Conall is approached by a businessman who offers a cure for his sister in exchange for the use of Conall’s rare tracking ability, Conall forges an unbreakable contract with him. He has to find and retrieve the key to the cure: dangerous murderer, Thea Quinn.

Thea’s attempts to evade the ruthless werewolf are not only thwarted by the Alpha, but by outside dangers. With no choice but to rely on one another for survival, truths are revealed, intensifying a passionate connection they both fight to resist. At war with themselves and each other, Conall and Thea’s journey to Scotland forces them to face a heartrending choice between love and betrayal.

Thea isn't human but she doesn't know what she is. She's strong, fast, can take a bullet without hardly flinching and has been on the run for a long time since she escaped the man who experimented and tortured her but is still searching for her and wants to get her back.

Conall is hired to find Thea and he is led to believe she's a cold hearted killer. But he wants to save his sister's life and the guy that hired him says that Thea is the key to the cure.

Conall is an alpha werewolf and he has a crazy good tracking ability once he gets someone's scent. So he's able to find Thea quite fast and that's when the fun begins because Thea has a few incredible abilities of her own. Once Thea realizes that she can't get away from Conall because of his tracking ability, she stays with him and even helps him a few times so he starts to believe that what he's been told about her is not the truth. Little by little the truth comes out and it's horrible. The guy who hired Conall to find Thea is a horrible person who tortured her and she's going to do whatever she has to in order not to be his prisoner again and she can only hope that Conall will come to believe her and not hand her over to him.

At first all he wants to do is get her to the guy who hired him and get the cure for his sister but things change pretty fast and all his well thought out plans go out the window. There's more than one guy interested in Thea though and when they start to face danger everywhere they turn, Connal knows that someone is telling the bad guys where they're at and where to find them since they can't seem to escape them for long. There are so many twists and turns in this story it was hard to know who to trust or believe but the truth of what Thea is comes out eventually and all the lies that have followed her also get set straight. I was completely invested in this story, I was on the edge of my seat waiting to see what else would happen or what new element would be introduced into the story.

Seeing Connal and Thea get closer, find the truth and realize they can trust each other was great along with the mystery surrounding what she is and why her supposed adopted father wanted her back in his care. There were little clues as to what she was and I've read enough paranormal romance books to have an idea what she was and I was right but it was fun to watch it unfold. I loved that Conall was Scottish and has a sexy Scottish accent and used words like, "Lass" all the time. Be still my heart but I do love a Scottish accent, even if I'm just reading it.

This was such a fun book. There was enough mystery, adventure, romance and twists to make this a very engaging read that I thoroughly enjoyed.