This is a weekly blog post that I'm calling Apartment Hell  Life. I've mentioned a few times some of the crazy things that go on in and around my apartment complex in the past 24 years that we've lived here and people keep telling me I should write a book. But instead of a book, I've decided to share the crazy things that have happened in and around my apartment complex in the last 24 years here in a weekly blog post.
Last week I told you that my neighbor got caught stealing another neighbors registration sticker. The police were called and they took the entire license plate because it was also stolen.
So on Sunday, the thief walks down to where me and my daughter are and says that someone stole her license plate. *Eyeroll*
So I say, Didn't the police talk to you a few days ago about the stolen plate and sticker? She of course acts shocked and says no. When I know damn well they did. So my daughter and I inform her that the police got called because "someone" took the registration sticker off of someone else's car and put it on hers. The other lady called the police, they came out, took a report and told everyone who was standing around watching that they were also taking her license plate because it was also stolen. The thief then says someone is setting her up that the sticker and license plate were hers.
Two days go by and my next door neighbor catches my daughter outside and he tells her that the thief was talking all sorts of trash talk about me and my daughter telling him that we called the police and are telling everyone that she stole a sticker. LOL Ok, I already knew she was a crazy woman and loves to gossip but wow. So we're just waiting to see if she steals another plate or tries to go to the DMV to actually register her car. I don't know what will happen if she actually goes to the DMV.
---- 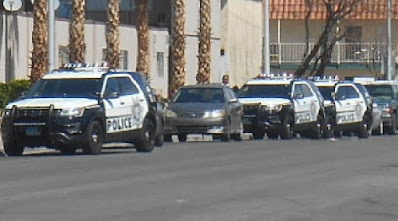 Sunday afternoon and evening I spotted the police by the managers office. I have no idea what they were doing but they stayed out there for about 4 hours. There were also 2 unmarked cars with police officers sitting in them like they were all waiting for something but I have no idea what. Nothing happened, no one else showed up and then they left. Maybe they were waiting to see if someone got home. Not really sure but it was weird.
The high this week was 102F/38C
So that's it for this week's Apartment Hell  Life! Be sure to come back next week for more.
Posted by Mary Kirkland at 12:00 AM 56 comments