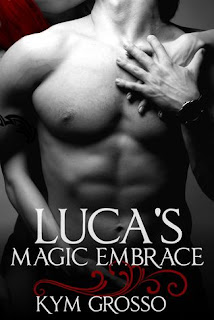 Sexy vampire, Luca Macquarie doesn't do love; especially not with humans. Yet, ever since he rescued Samantha Irving, he can't deny the enigmatic attraction he's developed for the alluring mortal woman. Concerned for her safety, he's determined to bring Samantha back to her coven. His mission is to go find the novice witch and bring her home, nothing more, nothing less; falling for her is not supposed to be part of the plan.

Samantha doesn't want to be a witch, yet that's exactly what she is. After failing to elicit her magic, she escapes to the mountains in an attempt to resume a semblance of her previous human life. When an arsonist torches her cabin, Samantha's worst fears are realized. Aware that her life is on the line, she reluctantly agrees to return to New Orleans with Luca.

Warning:  This book contains several love scenes and is intended for adult readers only.

This is the second book in the Immortals of New Orleans series and while it can be read a stand alone, it will make more sense if you read them in order.

We met Samantha in the first book, she had been under the spell of a powerful mage and a crazy vampire. She did things that she doesn't remember and because of the magic that had been used to be-spell her, part of that magic is part of her and she's now a witch who can't call her magic to the surface.

Luca was there was she was found and questioned in the first book and he felt something for her, which is weird for him because this particular vampire isn't crazy about humans. But he goes to her when he fears she's in danger because he wants her to come back to New Orleans with him until the danger is over. Right from the beginning there's danger and a mysterious vampire who seems to want her to find something that she doesn't have. But there are people who are willing to kill for this mysterious object that she needs to find and that puts both her and Luca in danger.

This story had kind of a treasure hunt type of feel to it because essentially that's what they were doing. Finding clues that lead to another clue while trying to find a dangerous object before someone else finds it. But while they're looking for it, they fall for each other big time which was fun because Luca started out not liking or trusting humans at all.

You can expect this book to have a lot of action and a lot of sexy times with these two. They are seriously hot together and can't seem to keep their hands off each other. Not that I'm complaining at all. I like how on the last page you see where the next book is going but there are no cliffhangers with this book as the main storyline is closed and nothing is left open.