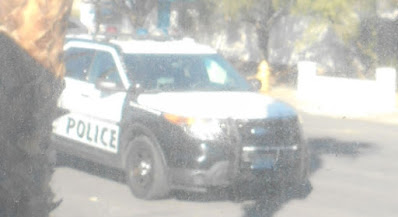 So this week I ended up calling the police, I was outside with Falcor and a lady who was walking down the center of the street carrying a baseball bat that she was dragging along side her so it was making a pretty unmistakable noise as she was getting closer. I wouldn't have been worried but she was also screaming at no one in particular, not that I could understand what she was saying. But as she was passing by me, she turned to face me and started walking over to me, all the while shouting something unintelligible.
She's homeless and I've seen her around here because she shouts a lot. I think she has mental problems and her being homeless isn't helping her situation. She topped me last month and tried to stop me from going past her on the sidewalk but I just told her to get out of my way and she went out in the middle of the street to stop the cars from driving by her.
But this week she started to raise the bat and I brought out my taser, turned it on and set it off a couple of times. Then I yelled at her, "You better get your ass away from me, because I will light you up with this." And then pulled the trigger again.
She had the bat on her shoulder and was still screaming about something and then walked away. I came inside and called the police because I don't like feeling like I've just been threatened. I saw out my bedroom window when they got here and I went outside. They looked around for her, she was gone and then said that if I see her to call them back. There really wasn't anything else they could do.
I mostly take my taser with me at night because there have been a lot more homeless, tweakers, crazy people walking around here. Good thing I took it this time too.
---- 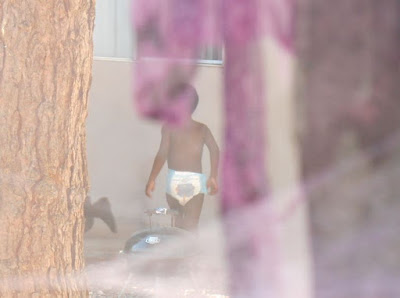 You remember that child I've told you about in my courtyard that is always outside with no clothes, shoes and is only in a diaper? I got a picture of him (I didn't want to show his face) but you can see he's only got a diaper on, no shoes or anything. He and his brother were outside and this kid was just standing still screaming at the top of his lungs. Just screaming in front of his door for no reason and his mother never said a word to make him stop. I don't understand this mother at all. This kid has almost been hit by a car at least twice that I know of when he wandered out in the street.
----
The high this week was 76F/24C
The low this week was 46F/7C
So that's it for this week's Apartment Hell  Life! Be sure to come back next week for more.
Posted by Mary Kirkland at 12:00 AM 46 comments