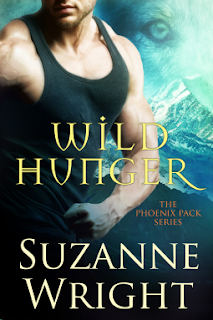 When half–wolf shifter Frankie Newman receives an e-mail from a family member she didn’t know existed, a secret is revealed: as a child, Frankie witnessed her father killing her mother…and then himself. Frankie was torn from her pack by her mother’s human relatives, and the trauma was erased from her memory. Realizing that she’s been lied to her entire life, she’s never felt more alone. Until she catches the scent of an old friend—warmly familiar and intoxicating.

Trick Hardy, enforcer of the Phoenix Pack, can sense the rush of mutual attraction when he sees Frankie again. He knows immediately that she’s his true mate. But he also knows that, given her fragile state, he needs to tread with care—no matter how fierce his surging desires.

As aroused as Frankie is by Trick’s darkly dominant air and simmering desire, her priority right now is her past—not her future, no matter how tempting. But as more secrets emerge and Frankie’s life is threatened, Trick must do everything he can to keep her close and safe. After all, it’s their destiny.

I should start by saying that I haven't read this series in order. I've only read 2 of the other books in this series but I didn't feel that I was missing much or lost while reading this book.

Frankie makes a living making sculptures that sometimes were of a dark or spooky nature. Frankie is half shifter but was raised by her human family after she was traumatized as a child and taken away from the pack by her human side of the family. She knew she was part shifter but she didn't know anything of the pack her father had belonged to because her grandparents who raised her told her lies her entire life. Frankie only finds out about the pack she belongs to when her aunt reaches out to her.

Trick is part of her aunt's pack so Trick goes with Frankie's aunt to meet her for the first time in 24 years. It's at this meeting that he realizes that Frankie is his mate. After Frankie comes to his pack's home to meet her grandmother and other family members, he's already trying to get closer to her. Trick wasn't satisfied to let her make her mind up about him on her own terms, he went to her on several occasions after she met her grandmother and the other family members so they could get to know each other.

While Frankie is getting to know her dad's side of the family, her mom's parents who raised her are constantly trying to get her to leave the pack in the past. Her uncle is very mad that she's decided to get to know the wolf side of her family as he sees them as a bunch of animals. The uncle is a total ass and I really didn't like him at all.

There's also a side story of a pack of wolves that wants an alliance with Trick's alpha, Trey. But this other pack and its leader are a bunch thugs for the most part and Trey wants no part of an alliance with them but their alpha won't take no for an answer.

Frankie is getting to know her new family members but she thinks that she saw something bad when she was three years old and just can't remember what it was. I thought I knew where this story line was going but I was wrong. There's a big reveal, a nice twist that I didn't see coming and family secrets come to light. I really like it when I think I know where a story is going and am totally wrong and a great twist is thrown my way.

I really didn't care for Frankie's maternal grandparents. They have a lot of money and kept her away from her father's side of the family because of something terrible that happened even though they knew that Frankie was half wolf shifter and as a kid was scared of shifting for the first time. She grew up without a pack or other shifters in her life because of them and I really despised them for that.

Trick and Frankie are great together and I like how these shifters just know when they find their true mates and how the bond lets them get really close.

While I haven't read all the books in this series, I didn't need to in order to enjoy this book. This series is really good and I'm enjoying it quite a bit.

Disclosure: I received a free copy via NetGalley, I voluntarily read and reviewed an advanced copy of this book. All thoughts and opinions are my own.