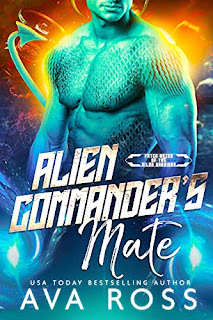 Book Description
An alien warrior has made me an offer I can’t refuse. In exchange, he can do what wants with me for one week.
I want a child, but that’s impossible now that Earth men are sterile. Then a ping from a distant planet reaches us. Aliens are real, and they’re interested in getting to know Earth women better. The Xilans fall into an insatiable urge once every three years, called the Slaking, and there aren’t enough females to give them what they need.
Like many Earth women, I sign up. For one week, I’ll make an alien happy and in exchange, I get a child. As long as I keep my heart of out of the equation, things should go fine, right? But when an intergalactic war erupts, we must fight for our very survival.
Alien Commander’s Mate is Book 1 in the Fated Mates of the Xilan Warrior Series. This book offers aliens who look and act alien, heat, and a guaranteed happily ever after.
My Review
Lydia signs up to be with an alien for a week so she can get pregnant and have the baby she's always wanted but can't with a human male because they are all sterile now. She is tested to make sure she is healthy enough to have a child and be with one of the aliens. She is reassured that all the aliens have been vetted and will treat her well and not hurt her which eases her mind a bit. While it was a bit weird to have to stand in a room with a bunch of alien males and wait for one to pick a female, it was also kinda hot. Especially since the alien who picked her is big, blue with a tail and horns. I only wish we had a whole face on the cover because I wanted to see those horns. I really dislike these decapitated torso pictures. I want to see the face.
Gorok is the commander of a ship and after having a bit of a battle with other aliens, he and his crew go to a space station where they will pick a human female to be with for a week. A lot of females on their planet were killed in a war and there aren't enough of them now. But right as Gorok and Lydia are getting to know each other, the space station they are on is attacked by other aliens and if they capture Lydia, it won't be a good time for her. The aliens attacking the station are giant spider-like aliens that wanted to implant their egg sacks in her. Sounds like a nightmare to me.
It was fun to watch Gorok and Lydia get to know one another better and fall for each other as they fight for their lives.
I had so much fun with this story. There's a droid and a cat like animal called a catrush both make this story so much fun.
I give this book 5 out of 5 stars.
Amazon
Posted by Mary Kirkland at 12:00 AM 33 comments