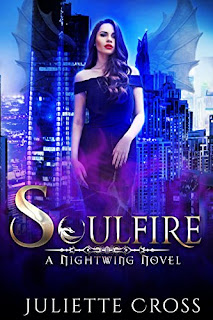 Tensions are rising in the Gladium Province. The boundary between humans and Morgons has begun to blur. While the human aristocracy strives to maintain distance between their daughters and the dragon-hybrid race, fate has other plans.

As the daughter of the corporate king, Jessen Cade is duty-bound to honor her arranged marriage to a man she detests. Feeling trapped by family duty and a loveless future, she longs for more, straying to the Morgon side of the city.

Lucius Nightwing is the eldest son of the powerful Morgon clan, and the greatest enemy of Jessen’s father. When a bar-room brawl thrusts Jessen into his arms, his dragon roars to the surface, craving to sate his carnal hunger in the brown-eyed beauty. The beast in Lucius recognizes her as his own, even if the man refuses to admit the truth.

I started reading the Vale of Stars series and didn't realize that this series, the Nightwing series was connected to that series. All I knew is that I wanted to read more from Juliette Cross so I picked this one and I'm glad that I did.

Lucius is part of the powerful Morgon clan and a serious enemy of Jessen's father but that doesn't stop him from falling head over heals for Jessen.

Jessen knows that she's supposed to marry a man that her father has picked for her to strengthen her family's ties with his. But she's not in love with this guy, she doesn't even like him and with good reason. So when she's around Lucius, a supposed enemy of her family, she's not sure how to feel but it sure isn't hate.

Jessen needed to get away from her father and brother because they were both control freaks, hell bent on telling Jessen what she was allowed to do with her life and I hated them. So when Jessen and Lucius started hanging out more and acted on their attraction, I knew Jessen would not be stuck in a marriage that would have been awful for her.

Lucius is a Morgon and has an inner dragon as well as wings so he can fly and I loved the flying scenes when he either swoops in for some reason or takes her for a flight around. Lucius doesn't want to be attracted to a human and Jessen has grown up believing all kinds of bad things about Morgonkind so they both have some things to work through. But once they do, there's no stopping these two from becoming one of my all time favorite couples. Now I'm really looking forward to reading more from this author.