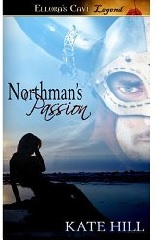 Now you guys already know I don't write many reviews because frankly, I don't think I do them well. lol So instead of calling this a review, how about we call it a "I loved this book so much I wanted to let all my friends know so they will read it too" blog post. *wink*

Erik Ice Tooth is used to getting what he wants. Undefeated in battle, no man is his match and no woman resists him, until he meets Bera, daughter of his King.

Disgusted by the hulking brute who asks for her hand in marriage, Bera adamantly refuses him, but Erik is determined to have his way. He abducts Bera, vowing that theirs is a match made by the gods—and he has many lusty tricks in store to prove it.

Now it's been a while since I read a Historical because I've been on a crazy vampire high for a long time. But I won this ebook and decided to read it and you all know how I feel about ebooks. o.o I don't usually read them unless they are by authors that I already like because too many times I start reading one and it's bad...Bad I say!

But...this was so good! Oh My Gawd...I got it in my email and I decided to read the first few paragraphs to see if it looked like something I might like. I didn't stop reading until I was done. It didn't even occur to me that I was reading the entire book until I got to the end and was like..omg, that was fantastic!

The funniest part of the book by far is Erik meeting Bera for the first time because he had fallen into a dung heap and smelled really bad. He didn't even bathe before asking for her hand in marriage! It's no wonder she said no to him, I mean really...who wants to be proposed to, or in this case be bartered over for a bride price like some piece of cattle *now I remember why I don't read many historicals, I want to reach through the book and bitch slap the men!* by a man who smells like a filthy beast? Not me...

But the best part, *are you ready for this* I'm actually thinking of buying the second book after this one! *I know! Gasp! She's gonna BUY an ebook?* Kate Hill told me that Northman's Pleasure is now out and it's about Erik's brother, Grim.

For those of you who would like to buy Northman's Passion, you can find it at this link on Ellora's Cave.

While I was looking at Kate Hill's different books on Ellora's cave, I found that she also writes PNR! Hubby is going to dog sit for a few days at the end of this month and I think I just found a few books to keep me busy. *rubs hands together excitedly*

If you like paranormal reads then this one might peak your interest, I know it did me.
Moonlight on Water

Oh, and since I won this first book on Shelly Munro's blog Taste of Kiwi, here's a link to one of Shelley's eBooks on Ellora's Cave. Because I never would have found Kate Hill without her. 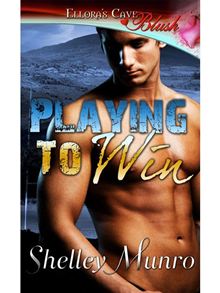 Professional rugby player Lane Gerrard is used to women throwing themselves at him, but a scurrilous tabloid article naming him as father of a child sends his temper soaring. The woman he confronts doesn't fit the blackmailer profile. Kate Alexander is attractive with an enchanting innocence, enticing. A total stranger. Her feistiness draws his unwilling admiration, but the child…he is the image of Lane.

Kate can't deny her son's similarity to the sexy man at her door but no way will she hand him over without a fight. Kate doesn't possess money but she can shower her son with love. With public speculation rife, Kate reluctantly works with Lane to discover the truth. They grow closer as distrust slowly turns to mutual fascination, but the tabloid articles bring out a stalker. Mild pranks escalate into danger, and suddenly Lane realizes Kate is a woman he could love. With Kate and her son, he could have a family. Now, with his heart on the line, this is one game he's playing to win. 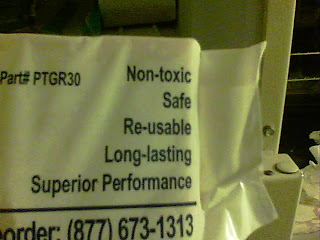 Knowing that it gets really hot here in the summer months I've made provisions in case the power goes out for a couple of hours. I say a couple of hours because I wouldn't use this method for more than a few hours in the temps that we get here..ie..115 F

But if for some reason the power goes out for just a couple of hours I have ice packs in my freezer for emergencies to keep my rats cool. You are probably wondering how ice packs would keep the rats cool enough in temperatures like that? Well I'm going to tell you. But first I want you to take a look at the photos and see that I've bought all Non-Toxic Reusable ice packs. They last longer and are easy to keep in the freezer. 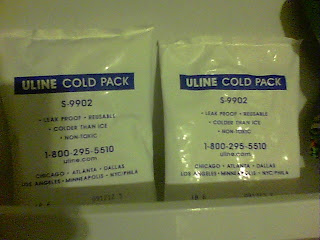 I have two different types and sizes of ice packs. These are smaller gel packs. These would be used inside the cage if needed. I would wrap them in a dish towel and let the rats lay next to them to keep cool. You can also freeze water bottles and wrap those in dish towels. 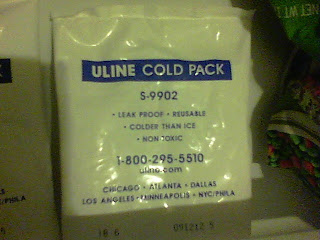 They can also be used on top of the cage to create the 'air conditioner'. 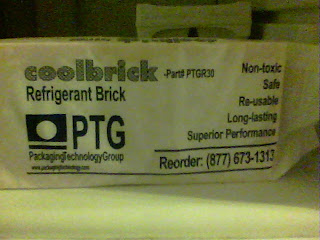 The second Ice pack I have is a larger CoolBrick. It's the size of a brick and lasts a very long time. I would use this on top of the cage for the *ratty air conditioner*