Review: Dreaming of the Dragon Shifter by Rinelle Grey 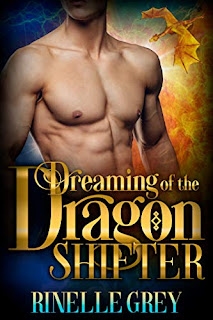 Together they can end a three hundred year war. But only if they don’t fall in love first…

Jayrian is a dragon shifter with a plan. It’s a plan that will defy the council elders and put his life at risk—but if it works, it’ll save his clan and help end a war that’s raged for centuries. The key to making it all come together? The sweet, shy, and all-kinds-of-adorable small town librarian he’s starting to like way more than he should.

Gretchen isn’t looking for adventure. She’s perfectly happy getting her thrills from books, thank you very much. But when she invites the handsome mystery man she’s been crushing on at work to dinner, she might just end up with a bigger adventure than she knows what to do with …

It’s not long before Jayrian learns there’s more to Gretchen than meets the eye. She’s everything he ever wanted … and nothing he can have if he wants his plan to succeed. He’s ready to give up his life for his people, but can he give up Gretchen when the time comes?

Dreaming of the Dragon Shifter is a delightful paranormal romance, with a little bit of action. If you like hot dragon heroes, the strong women who mate them, and a heartwarming HEA, then you'll love joining Rinelle Grey's growing clan of satisfied readers.

Download Dreaming of the Dragon Shifter to visit the Australian outback and find your hot dragon shifter today.

Jayrian wanted to send Gretchen into the cave to wake up their prince who had been sleeping for over 300 years. The humans were going to start mining where the Prince slept and they would discover him which would be bad. But every time he brought it up with the elders they wouldn't hear of it.

A rival dragon shifter clan guarded the cave where the Prince slept but they couldn't go in because the cave was warded against all dragons except its own clan and his clan couldn't get near him but they wouldn't be able to detect a human which is why Jayrian wanted to send in one to wake him.

As Jayrian gets closer to Gretchen and let's her know what he is and what she would have to do to wake the Prince, he finds it harder and harder to let Gretchen be the one who has to go in the cave to the Prince even though it's his idea. The woman who wakes the Prince will also have to mate (have sex) with him to replenish his magic. The longer Jayrian is around Gretchen the more he knows that she is his mate and he can't let her go. Jayrian knows that having a relationship with a human is not something the elders will ever approve of but it's time for his people to try and get along with the humans. Gretchen has a plan and it's a good one. I don't want to say much more because that would give too much away but her plan is a really good one. I like how this ended.