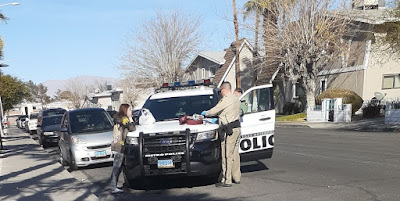 On Monday my daughter spotted the police outside. My neighbor who lives right next door said she saw the police go over to the old maintenance shop and pull this woman out who had broken into the locked shop. They had her out by their car for a while but they didn't arrest her. I hope they at the very least they gave her a ticket and summons to appear in court. 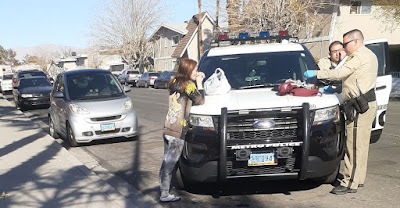 It's not even the first time she and her boyfriend have been caught breaking into that shop. Last year I blogged about what they had done to the old maintenance shop in this post you might want to check out so you can see what they had done to the shop the last time they were in there. All the holes and damage they caused are all fixed now and on Tuesday morning the maintenance man who works here was here screwing the door shut, yet again. I'm sure it won't take long for her or someone else to break that door open and make their way in again though. It's an ongoing problem. I think the owner should put a metal door on there and reinforce the door jam so they can put better locks on it. But hey, I just live here. Move along, now. I know nothing. I just can't believe she wasn't arrested! She was caught red handed inside the shop. I don't know, maybe they couldn't prove she is the one who broke in and opened the door but I don't think it should have mattered. I'm a little irritated.
-----
On Friday I'm out walking Falcor and I see this lady across the street trying to parallel park her white truck. She's back and forth, back and forth, trying to get this truck parked and she can't do it.
She sees me watching her and she rolls down the window and I think she's gonna yell at me or something. No, she asks me if I know how to parallel park. lol I tell her yes and she asks me if I will park her truck for her because she cannot do it. At first I'm like, uhm, hell. Then I say yeah if you'll hold on to my dog. So I get in her truck while she's holding on to Falcor's leash and parallel park her truck for her. It was a big enough spot so it's not like it was hard to do. She says thanks, hands me back the leash and goes into the apartment building only to come back out not 3 minutes later. She yelled across to me that "The mother*ucker* wasn't even home! She got in her truck and sped off. LOL
Well, that was a first.
So that's it for this week's Apartment Hell  Life! Be sure to come back next week for more.
Posted by Mary Kirkland at 12:00 AM 65 comments