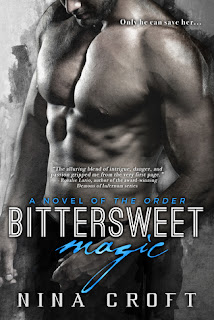 Roz has been indebted to the demon Asmodai for five hundred years, and her freedom is just around the corner. All she has to do is complete one last task for him—obtain a key that had been hidden in a church centuries ago.

Piers, the Head of the Order and an ancient vampire, is intrigued by the woman who comes to him for help. She’s beautiful and seemingly kind, but she’s hiding something. And he’ll find out who she is and what she really wants once he uses his power to get inside her head. But Piers has no idea that Roz is immune to his mind-control...or that he is simply a pawn in her dangerous mission for freedom.

Roz has been in debt to Asmodai for 500 years but she only has one more thing to do for him and her debt will be fulfilled and she'll be free. All she has to do is find a key, give it to him and she'll be done. No small task once she starts looking for it since things are far from safe where she is searching.

Roz is undercover at a convent when she witnesses something horrible. She's able to save one nun who an evil vampire has carved a message into her back and was told to find Piers Lamont. So Roz helps get the nun to Piers and shows him the message.

Piers is an old vampire, like 2000 years old. He's the head of the order and used to getting his way. Roz asks him for help with her task and she'll do anything she has to in order to
complete her task.

This story is filled with action from the very beginning and after meeting Piers the action just gets even better. Magic seems to be round every corner, paranormal creatures are swarming in from all sides and twists abound in this story. There's also one heck of a hot romance going on and more than a few laughs.

After reading the first book in this series, I really didn't care for Piers all that much but underneath his cold exterior, I knew there was a little good in him, but hoped for more. I guess after living for 2000 years you're going to have some hang-ups and personality problems with all that you've seen and experienced. But this guy goes and does something so selfless that really changed my attitude towards him. But the ending to this book had me shocked with one twist after another and they weren't small ones. More like big, shocking twisting truth's that have been kept away from people that are about to change their lives.

Once again a book in this series has me wanting to read more. I cannot believe my luck in finding a series that I'm absolutely loving more with each book and putting things off just so I can get through the next book.

Note: I went looking to see if there were more than 3 books in this series and indeed there is a 4th...a novella Called Bittersweet Freedom. But this exclusive novella was only released in the box set, so you already know what I did, I bought the ebook box set because I wanted to read Carl's story. It was only $5.99 and since I hadn't read Bittersweet Magic yet, I figured I would be getting 1 full length book and a novella, neither of which I had read yet for that price and I had an Amazon gift card balance I could use to buy it so, free! lol So here's my review of Bittersweet Freedom as well.

Shera was a cat shifter but she could also shift into a hellhound. Her family had been bonded to Asmodai for generations and when she turned 21 she became his housekeeper. Some people thought she was a cold bitch but really, she was just unhappy. She wanted more than to be a housekeeper to a demon, she wanted a life. Now if she could only get her demon master to stop sucking face with his wife and talk to her instead of dismissing her.

Carl was a werewolf and worked as security for the order. Asmodai asked Carl to find Shera after she ran away but he was having a hard time keeping track of her since the full moon was only two days away and his wolf was restless. It didn't help his nerves or his focus but he did find her and before he could bring her back, she got away from him.

Shera had a bucket list and she planned on doing everything on her bucket list before she died. She wasn't sure until Carl confirmed it but because of the sigil Asmodai had put on her, if she didn't come back to the abyss (hell) she would die in 30 days. Carl decides to stay with her and try to persuade her to go back but she would rather die than be a slave.

This author loves to throw some shocking twists into a story but I love not knowing what's right around the corner and there's one twist after another in this story. I won't say much but there's a lot about Shera that even she doesn't know.

I loved this story and loved the ending. I thought it was perfect for these two. I am hoping that there will be more books in this series in the future because it would be a real tragedy to create such a wonderful world and not do more with it.